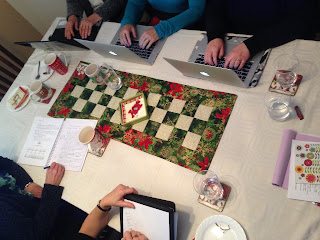 In late 2012 I was becoming desperate for like-minded people. We had been living in Edmonton for 5 years, and I was missing my writer’s group in Saskatchewan. I started thinking that surely there must be other writers out there who felt the same way I did. Maybe I should start a group of my own.

But then all the scary thoughts started plowing through my mind:

- I can’t lead a group! What do I know about writing?
- I need them; they don’t need me.
- Do I really want one more commitment in my already busy life?
- Is there a set protocol for writers groups? I don’t even know what I’m doing.
- Will anybody show up? If I build it, will they come?

But the insistent thought Maybe I should start a group wouldn’t go away. It kept popping its happy head up through all of the negative noise. Gradually I came to realize that this wasn’t just a thought I had come up with on my own. God had put it there. He was nudging me to start a group.

I prayed and prayed, asking God to show me if this idea was really from Him.
LORD, please give me a sign that this is Your idea.

January 2013, just before my husband and I left for a 2 week holiday, a mass email came out to all InScribe members in the Edmonton area: there are no Christian writers groups in Edmonton. Would anyone be willing to start one?

We went on our holiday, where that email was never far from my mind. I continued to pray for direction and courage. And I started to get excited.

When we got home I replied to the email. The response was that there had been one other who had shown interest in starting a group. I was given her email address.

We met for coffee. In our conversation we realized that we each had different visions for a group and decided to each start one – meeting at different times of the month and in different parts of the city - and see how that went. We both set our start dates for May.

From March to May our groups were advertised through InScribe’s different venues: website, FellowScript, listserv. I also contacted a couple of writer acquaintances I knew.

When May 8 rolled around I was nervous.
Five strangers showed up, and it was obvious from the start that these people were as anxious as I was to be around other writers. We immediately clicked. I saw that all of my hesitancy and nervousness had been unnecessary. Hadn’t I believed that God had nudged me to start this group? I should have been confident that He would bring the people He wanted and that it would be a safe place from the start.

We met again in June and before we broke for the summer we had decided on a name, based on what people were looking for in a writing group:

And Writers CAFÉ was born.

In September a few more people joined.  Over the years, others have come along. Some tested the waters for a short time and didn’t stay, but the core people have been around from the beginning. At present we have 10 committed members who come every month. One of our members travels 2 hours, one way, to be with us.

We range from beginning writer to published author; cover genres from children’s books to poetry, fiction, non-fiction, script writing, and blogs. Each writer is on her own writing journey. Each voice is unique. But we all come together in unity and mutual respect.

I discovered I really didn’t need to worry about leading. I host and facilitate but we all learn from each other. We have become a sisterhood, and the trust we have established is of inestimable worth.

God is present. It is His group, after all. Together He is molding us and making us into the writers He wants us to be so that we will use our gifts in our unique ways to make Him known.

I love Writers Café, individually and as a group. I have ventured places in my writing that I never would have dared without their encouragement. And their prayers have moved mountains in personal lives.

God is doing marvelous things in and through Writers Café, and it wouldn't have happened this way if I hadn’t been obedient to God’s nudge.