What's My Name? by Carol Harrison

It didn't take too long until I realized that not everyone liked their given name (s). My mother confided she never liked her name and my second oldest doesn't like hers either which happens to be her grandmothers' names. This picture of a much younger me gives the impression that all is not right with my world and it might have been a bit of a cold that day that brought out the frown. It wasn't because I didn't like the names my folks bestowed upon me.

My parents officially registered my name as Carol Elaine.  Mom told me they chose it for two reasons. They liked the sound of those two names together in that order and because a favourite cousin of my father had daughters named Carole and Beth Elaine. To pay homage to a special person in his life and subsequently in my mothers, they picked my name.

But dad like Elaine the best and mom liked Carol. Dad won the discussion and they called me Elaine. Why change it? After all, I didn't hate the name. In fact as I became obsessed by reading and history, Elaine had a romantic connotation in Arthurian legend and from Tennyson's poem Elaine and Lancelot. The poem begins by talking about Lady Elaine with these words,  "Elaine the fair, Elaine the loveable".

My grandmother called me the diminutive form, Lainey, and it sounded so loving as it fell from her lips. To the day she died at 95, I remained her Lainey. Why would I want to change any of that?

I didn't set out to deliberately change the name people called me and start using my first name of Carol, without the e. It happened by accident, one I didn't think would even matter in the grand scheme of things. Oh I admit, I secretly wished to go by my first name at times, at least until I heard my Grandmother call me her endearing term. Yet change it did and then stuck at least with some people.

In my second year of university, students were asked to print their full name and circle the name they preferred to be called by. I dutifully printed Carol Elaine and after only a brief hesitation of my pen hovering over Carol, I moved on and circled Elaine. In spite of my circling my middle name, the professors continued to call me Carol as if that pen mark had disappeared from the papers. I didn't answer them at first. After all, I wasn't used to Carol and another Carol sat in one of the classroom seats. Then I attempted to change their minds to no avail. Finally, I decided it didn't matter and I would answer to what they chose to call me for the year.

At school my name was Carol. At home or with friends it was Elaine. Confusion reigned at times but I adjusted well and deep down might have even enjoyed the intrigue, the change, and decided to go with the flow. What difference would it make?

But I met a young man in those classes. Towards the end of the final term we began dating but thought it would be over when we went our separate ways for the summer and the following year. A few weeks of hanging out together with him calling me the only name he had heard in class wouldn't make any difference.

Forty-eight years have disappeared into history since I began dating that fellow and almost forty-seven since I married him. He didn't want to change what he called me, especially since Elaine was also his mother's name. My family and old friends didn't want to change either so I began to answer to both of my names. At a time when most women changed their last names to that of their husband when they married, I managed to change both first and last and all documents are now signed as such.

What's my name? My first and middle names both remain the same as on my birth certificate even though the one I used most flipped from middle to first. But what do those two names mean anyway? In searching for the meaning of them, I discovered that Carol is the feminine of Charles and means free man or free person. It also comes from the vocabulary word carol meaning joyous song. Elaine has a Greek origin and means sun ray or shining light.

I reflected on those meanings in light of being a follower of Jesus who has indeed set me free. He paid the penalty for all my sin when he died on the cross and rose again. I am free in a way only God could provide which gives a reason for joyous song no matter what the circumstances I find myself in.

In Matthew 5: 14 - 16 it says, "You are the light of the world. A city set on a hill cannot be hidden. Nor do people light a lamp and put it under a basket but on a stand, and it gives light to all in the house. In the same way, let your light shine before others, so that they may see your good works and give glory to your Father who is in heaven."

As a follower of Jesus, I need to live up to the meaning of my middle name of Elaine and be a shining light to others. Rejoicing in word, action, and song for the freedom in Christ will encourage others and be that light to show them Jesus.

What's my name? I can change my name but it doesn't matter because God knows what it is and who I am. In Isaiah 43:1 I read, "Fear not, for I have redeemed you; I have called you by name, you are mine." So go ahead and call me Carol or call me Elaine for they are both my names, known by God just as everything else about me is known to him. 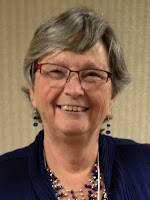 Carol Elaine lives in Saskatoon with her husband. She loves to tell stories and has always enjoyed those family stories which helped shape who she is and what she enjoys.