The Story of a Name -- by Denise Falk 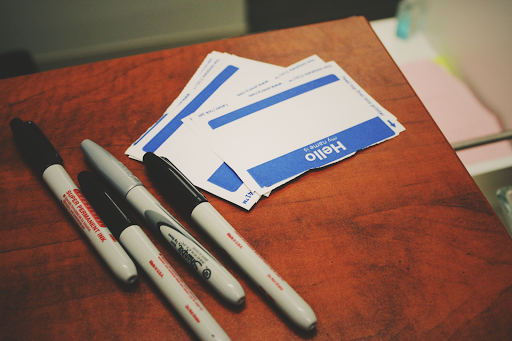 My mother had my name chosen before she even finished elementary school. She and her best friend promised each other that when they grew up and got married, they would name their daughters after each other. My name was set to be ‘Jocelyn’, or Josie for short, and everyone in the family knew of the ‘pact” that Connie and Josie had made. We don’t talk about that now though, because I have a cousin, who’s a year older than me, named Jocelyn.

The story continues that my Mom was going to call me ‘Elise’ next, because it sounded so ‘graceful and sophisticated’, but by the time I arrived, I became ‘Denise’. It doesn’t have any special meaning that I know of other than it’s a French name that means ‘lover of wine’, which is actually hilarious because I really don’t like wine.

Overall though, I liked my name growing up. It was easy to spell, easy to say but, unfortunately, it was also far too easy to remember because of a joke that went viral in the 1960s of a pregnant woman who was involved in an accident and, while in the hospital, she fell into a coma. When she awoke days later, the woman noticed that she was no longer carrying a child, and asked, "Doc, what happened to my baby!" The doctor replied, "Ma'am, you've had twins! You're the proud mother of a handsome baby boy and a beautiful baby girl. Also, you should know that while you were in a coma, your brother named the children for you." "Oh, no!" shrieked the woman. "Not my brother!" The doctor replied, "Well, ma'am, your brother named your daughter Denise." "Oh, well that's not so bad," smiled the woman. Then, hesitantly, she asked, "What's the boy's name?" The doctor grinned and said, "De-nephew."

I would cringe when I could sense someone was about to say, “Hey Denise, how’s De-nephew,” but I learned early on to be polite, to laugh and allow them to retell that tired old joke, because to be honest, I didn’t even understand what it meant.

I learned right from the start to hold my name loosely, either people were laughing and making the ‘de-nephew’ joke or mixing up the verbal and spelling nuances between the feminine and masculine forms. To this day, I continue to be called Dennis and Denis often.

My brother called me ‘Den-Den’ growing up. He initially meant it as a sibling insult, thrown around as kids do in some fight about who would choose the after school tv show, or who could have their friends over for dinner. That name stuck though, and as we grew up, I continued to be Den-Den to him. He was the only one who could call me that, and he would smirk while saying it too, eyes glinting with sibling ribbing. I miss being called Den-Den and have missed my brother a lot since he journeyed ahead of us all to heaven, far too early.

Denise is a great name, and it has served me well so far in life, but the story of my name is far from finished. The most important Person in my life calls me something else – he calls me His ‘masterpiece’ in Ephesians 2:10!

Compared to the incredible beauty of the all the things that God has created, he calls ‘me’ His masterpiece, and what’s more, He has also given me a brand-new name! God has a new name for me that he wrote on the stone (Rev 2:17) (Isaiah 62:2), that is an everlasting name that will not be cut off (Isaiah 56:5) and one that will serve God’s purposes for all eternity. Isn’t that just incredible! Isn’t He wonderful!