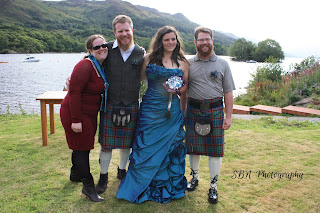 Nice to meet you!

I’m Stephanie Elizabeth. My first name means “crown,” and my second name means “oath of God.” As I recall, my mom liked the name Stephanie and one of her friend’s was named Elizabeth.

I married my hubby David Earl, my “beloved man of noble birth,” 38.5 years ago.

We have three grown children: (David) Nathanial, our “beloved gift from God,” Joshua Aaron, “Yeshua is salvation,” and Sarah Elizabeth, our “Princess, oath of God.”

I’d always wanted to be a mom. Therefore, it made perfect sense to name our firstborn David Nathanial. (He goes by Nathanial or Nate. We never wanted him to be known as “Little Davey.”) The sad irony is that he and his wife aren’t walking with the Lord. Nathanial would have referred to himself as a Christian until he was in his early 20s. He’s now in his mid-30s. Of course, he’s still beloved and a gift from God. It is our prayer that the Lord will draw him, his wife, and her family to Himself.

Fun fact: if our firstborn had been a daughter, we would have named her Melody Alyssa, which refers to a noble song. My hubby is a musician. So, this name would have been a tribute to him.

The Gospel in a Name

Our second son, who would have been named Natasha if he’d been a girl. I don’t think we ever settled on a second name, but at the time, I was involved in praying for and reaching out to Russian brothers and sisters in Christ who were being persecuted for their faith. Therefore, it seemed appropriate to choose a Russian name. (I also liked Sebastiana Alexandra, but that would have been a mouthful.)

However, God knew I had always wanted a daughter and may not have had more children if He’d given us a daughter back in 1984 or 1988, when our sons were born. And I can’t imagine life without either of them.

Joshua Aaron is very much like his dad, an easygoing, faithful follower of Jesus. Joshua settled in northern Saskatchewan after graduating from Bible college there. (It was amazing how God opened those doors, but that’s a story for another day.) Joshua is a gymnastics coach and very involved in his church. He also preaches from time to time. He’s getting married this summer, and we are hopeful that we’ll be able to attend.

Even though Joshua lives only two provinces away, it feels almost as distant as Scotland, where his brother lives. Dave and I hope to get back to the UK at least once more. It’s GORGEOUS!

On February 28, 1990, God sent us our third precious blessing. Our family was complete. Enter Sarah Elizabeth. Remember how I said I’d always wanted a daughter? One day, when she was having a disagreement with her brothers, she said, “Mom wanted me more than you.”

I had to tell her that I’d shared how much I wanted a little girl to let her know how special she was to me. I also told her that I hadn’t been smart enough to realize what a blessing little boys were as well.

Oh, the stories we as parents could tell!

If this past year has taught us anything, it’s that we truly don’t know what the future holds. I don’t know when I’ll see Nathanial and Laura again. (Hopefully, next summer in Jasper, Alberta, if not this year.) I don’t know if we’ll be able to attend Joshua and Ericka’s wedding, which they inadvertently set for my 39th wedding anniversary. What fun! I don’t know if Sarah will ever get an apartment with her BFF as they’re planning or if the Lord has other plans for her future.

What do I know?

(David) Nathanial is still our beloved gift from God.

Joshua Aaron bears the greatest truth of all eternity in his name. Jesus (Yeshua) is, indeed, the only source of salvation.

Sarah Elizabeth is our princess, evidence that God’s oaths, His promises, will all be fulfilled.

Names, they mean a lot.

And we must always keep foremost in our mind the Name Above All Names, our Lord Jesus Christ. During these days, it’s especially hard to do so, but as we repeatedly take our thoughts captive to obey Him (2 Corinthians 10:5), we will be richly blessed.