Hello, My Name Is... Marnie Pohlmann

The song by Matthew West begins with the words of this blog title. The lyrics begin by claiming the names of regret and defeat, but the chorus reminds us that our name is truly, “Child of the King.” I have been finding this month’s blog interesting in the variety of love, hate, rejection, acceptance of the names we are called in this world, and how exciting it is to wonder what our Heavenly name will be. 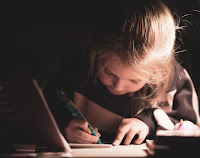 When I started school, I became confused when the teacher called me Marjorie. I had only ever been called Marnie. Who was this, Marjorie? I accepted being Marjorie at school, though, excited to learn to print that name. It had a lot of letters to learn but I was glad I did not have a shorter, more popular, common name. When I arrived home to show Mom my printing, she stated I had spelled my name wrong. Not only did I not know I was Marjorie, but I was Margery!

I am told I gained the nickname Marnie when I arrived home after my birth-day to a houseful of brothers who could not pronounce my name so shortened it to something they could handle. (I wasn’t the only one in the family that happened to. I’m sure one of my older brothers wouldn’t appreciate me sharing how I pronounced his name, which thankfully didn’t become his nickname!) 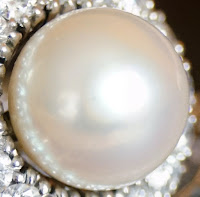 I don’t really know why I was called Margery - the name or with that particular spelling. Marjorie is English, meaning “pearl.” Margery is English or Scottish, also meaning “pearl” or my preference, “a precious pearl.” The name was popular in Medieval times but was definitely out of fashion by the time I was born.

Oddly, my nickname Marnie was not found in baby books until recently. I was a teen when I first met another Marnie, with that being her actual legal name. Now I know of many others. Different sources explain Marnie is either Scottish, meaning “from the sea” or Hebrew, meaning “out of the sea.” I consider that information a God-wink, letting me know that whether I am called Margery or Marnie, I was meant to be a precious pearl gathered out of the sea.

The name Marnie is probably most known for not being a nice character, as in Alfred Hitchcock’s movie or in the book by our Inscribe President, Tracy Krauss. (Do you know which book my namesake is in?) However, in art, the meaning of my name(s), pearl out of the sea, has become a metaphor for something rare, fine, admirable, and valuable. I like that.

Pearls are formed to protect a mollusk from aggravation. A microscopic speck settles inside the mantle of a mollusk, which is irritated by the speck and so begins to cover it with a pearl sac. Layer upon layer grows the speck into a pearl. Pearls sold throughout the world today may be man-made, cultured, or farmed. However, the rarest and most precious pearls are naturally created in the wild. The pearlescence (white shimmers) or iridescence (coloured shimmers) are more spectacular on wild, natural pearls than those created by mankind.

I am understanding more each day how these names suit me. I am the woman I am today developed through the aggravations of life. Enduring pain is not how most of us would choose to live out our life. However, without the pain, I would not find it easy to recognize the need for God’s protective covering as he heals me to be who He created. The irritation has been covered with His iridescence.

God has plucked me from the sea of sin, regret, and defeat to polish me as a child of the King; to be someone valuable in His kingdom. My second name, Ellen, means “light.” I am God's iridescent pearl out of the sea.

Marnie Pohlmann writes from northern British Columbia. She shares on her blog, Phosphorescent, how God continues to form her to be someone who absorbs and reflects His Light.

Email ThisBlogThis!Share to TwitterShare to FacebookShare to Pinterest
Labels: child of the King, iridescence, Margery, Marjorie, Marnie Pohlmann, my name is, name, Out of the Sea, Pearl