Our prompt this month asks writers: What “small step” in your writing life turned out to be a giant leap?
****

I stared at my computer’s monitor for some time, my heart racing just a bit. I’d been following the blog Novel Journey.com for a couple of years, enjoying the posts about writing, interviews, industry news and the weekly Sunday devotional. It was a highly respected blog, on the list of Writers’ Digest’s best blogs for writers. From time to time I’d left comments and was impressed with  the founders, Gina Holmes and Ane Mulligan. They were always willing to engage and I felt as though I knew them.

So when this post went up it made me sad but excited at the same time. Their regular devotional columnist had to step down. They asked everyone to pray for a replacement.

Though I’d been writing devotionals for a few years, and published a book that was selling well, I was hesitant to approach these professionals about writing for them. All kinds of reasons why I shouldn’t bother flitted through my head: they would likely have a flood of writers apply who were more qualified; I’d never written devotionals specifically for writers before – could I really do it every week? I almost closed the page but something kept my hand from hitting the close button. My last thought was: what could it hurt? If they say no, they say no.

I popped off a short note and attached a few samples of my work. Gina responded quite quickly. “You’re an answer to prayer! Can you start right away?”

I gulped and said yes. That small step has led to several years of writing for the blog, now called Novel Rocket. The discipline of writing to the deadline every week was invaluable and I’ve discovered mentioning that I write for the blog is regarded as a bit of a feather in my cap by industry pros. from the US. And the responses from readers has been greatly encouraging.

I was also greatly encouraged when Gina and Ane asked me to step back in after a brief time away when I was going through treatments for cancer. “Our readers miss you,” they said. I agreed to post every second Sunday and have loved getting to know other devotional writers who have shared the load with me over the past few years.

Yes, it was a small step, to approach Gina and Ane and offer my services, but it has led to open doors I did not expect as well as the gratification that writing always brings. It has also led to another book: Abundant Rain – a devotional journal for writers of faith.

It never ceases to amaze me how God can take our small steps and turn them into giant leaps. All to His glory. 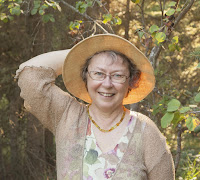 Marcia Lee Laycock writes from central Alberta Canada where she is a pastor's wife and mother of three adult daughters. She was the winner of The Best New Canadian Christian Author Award for her novel, One Smooth Stone. The sequel, A Tumbled Stone was short listed in The Word Awards. Marcia also has two devotional books in print and has contributed to several anthologies. Her work has been endorsed by Sigmund Brouwer, Janette Oke, Phil Callaway and Mark Buchanan. 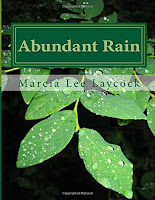 Abundant Rain, a devotional for writers can be downloaded on Smashwords or on Amazon. It is also now available in Journal format on Amazon.

Her most recent release is a devotional book for travelers:     A Traveler's Advisory