Echoes of the Vineyard by Sharon Espeseth

Preparations for this blog have been brewing in my brain for several weeks. As familiar as Christ's Vineyard Lesson is to me, I knew there were deeper concepts to explore. This brew needed special ingredients and time to prepare.

Steps toward the Vineyard

1. Mulling and praying over Easter Bible readings and sermons from church.

2. Reviewing the May prompt including Marcia's quote.

3. Fr. Johnny's question (paraphrased): What important message would Jesus, knowing his crucifixion was imminent, want to share with his disciples at their last supper together.

5. After our move, with bookshelves somewhat in order, locking eyes on a book I had not yet read: Secrets of the Vine: Breaking Through to Abundance by Bruce Wilkinson.

7. Without any thought connection, starting a new journal from my stash with quotes on each page and with this scripture on the cover: "Greater love has no one than this, that he lay down his life for his friends." (John 15:13)

8. On May 1, starting a new section of my daybook that has quotes on the theme of work.

Lessons Learned (A Book Review of Sorts on Bruce Wilkinson's Book, Secrets of the Vine)

One thing that puzzled me about this reading was the way God, the Winemaster or Owner of the Vineyard, would not only prune, but actually cut off branches that do not bear fruit. If you are reading this blog as a devotional, I suggest you read the first four verses of this chapter. After that you may consider which of the four groups, or baskets, you fit into. 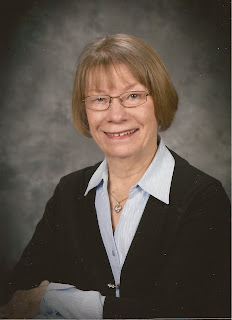 Since the question in our prompt asks for a degree of accountability, I am putting myself in Basket 2. Yes, I've received responses to pieces I've written. I do believe I have reached some readers with messages that God has been able to use to his glory. I have not written and submitted enough material to significantly change the world, but I may have pointed a few readers in a more godly direction.

Wilkinson is not referring only to the fruit we have produced because of our writing. In his book he refers to three secrets, or as he also calls each of them " . . . a little known or often-misunderstood principle that will unlock for you a life overflowing with fruitfulness for God. " Rather than outline the three "secrets" as he does, I will tell you about a few parts of the book that stood out for me.

First I realized I needed to know more about grape vines rather than about an ivy trailing around my living room. I thought of doing research on the Internet, but we, alas, have been without Internet since our Third Annual Move. That's when I discovered Bruce Wilkinson's book, unread, on my bookshelf.

Throughout the book, Mr. Wilkinson taps into what he has learned from vineyard managers. Have you ever wondered about Jesus' saying, "He (God, the Vinedresser), cuts off every branch in Me (Christ) that bears no fruit. . ."? Does that mean that if we are Christian and not producing fruit, God will cut us off? That does seem harsh. Some good Bible scholars, Wilkinson says, do believe that if we don't produce fruit, we can't be Christians.

Wilkinson points out that Jesus is saying, " . . . Every branch in Me . . ." i.e. in Christ, so cutting someone off from the faith does not seem likely. We are still Christians even when we are not producing fruit for a time, but we wouldn't want to stay that way. Wilkinson reminds us, "For by grace you have been saved through faith, and that not of yourselves; it is the gift of God, not of works, lest anyone should boast." (Ephesians 2:8-9)

The writer reminds us that the phrase, "cuts off," or "takes away," is an unclear translation of the Greek word airo, which would be more accurately translated as "take up" or "lift up." This is the way the word is translated in the feeding of the five thousand, where the disciples "took up" twelve baskets of food after all had been fed.

I have seen this in raspberry bushes. When it rains the branches get "muddy and mildewed," as the man said. "The branch becomes sick and useless." Instead of cutting this branch off and burning it, however, the vine grower will go through his vineyard with a bucket of water. When he finds a branch dragging, he will lift it up and wash it off. After this, the farmer says, "Then we wrap them around the trellis and tie them up. Pretty soon they're thriving."

Similarly, Wilkinson says, "When the branches fall into the dirt, God doesn't throw them away or abandon them. He lifts them up, cleans them off, and helps them flourish." Reading this, I felt like saying, "Eureka!" This passage makes more sense to me. I just needed to know more about vineyard husbandry. 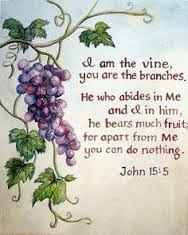 To grow in our Christian life, we need to allow God to discipline us and prune us. Gradually we will grow more fruits of the Spirit-- "love, joy, peace, forbearance, kindness, goodness, faithfulness and self-control." As our branches become healthy, we will produce more bountiful fruit.

My blog is getting long and I've been rambling about the first lessons of this book. There is much more to say about Secrets of the Vine, so my blog isn't a proper book review. I haven't even touched on "abiding in Christ," which is a continuation, but another whole topic.

In John 15:5, Jesus says, "I am the vine; you are the branches. If a man remains in me and I in him, he will bear much fruits; apart from me you can do nothing." With this, may I tempt you to read this little gem of a book, 126 pages in all.

This is the second book in Bruce Wilkinson's The BreakThrough Series. The first was the The Prayer of Jabez, which some of you may have read.

Email ThisBlogThis!Share to TwitterShare to FacebookShare to Pinterest
Labels: airo, Christ the vine, John 15:1-17, Secrets of the Vine by Bruce Wilkinson, Sharon Espeseth, vinedresser, we the branches