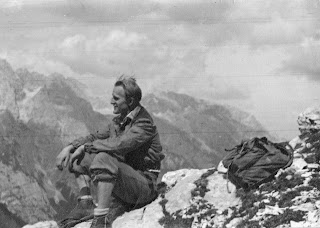 Remembrance Day always has a special meaning for me. As a boy growing up in rural Manitoba, I recall taking in the ceremonies at our local school and pausing at the appropriate time to reflect and honor those who gave their lives during military conflict.

Then, as a member of a local Air Cadet squadron, I participated in the solemn ceremony, standing at attention and listening to the dignitaries as they recounted stories about men (and women) who paid the ultimate price.
Again, many years later, now a father myself, I would attend the November 11th ceremonies in Winnipeg with my wife, being moved by the reading of John McCrae’s poem, In Flanders Fields. Looking around at all those who chose to give up a few hours of their day, both young and old, they came to pay their respects that memorable day. Curiously, I found myself reflecting on a personal connection to the horrors of war; through my father.
You see, my father, John Stermscheg, also fought during the Second World War, his unit pitted against powerful German invaders. Yet he didn’t enlist as a Canadian, because he was not born in Canada, but in Eastern Europe. Borders changed all the time in Europe, depending on which country had won the latest skirmish. Even though he was born in Austria, he was now (1939) living in Yugoslavia, and that made him fair game. Barely nineteen years old, he was conscripted into the Yugoslav army, took the requisite training, and participated in military exercises, even trained to become a pilot.
But then the storm clouds of war loomed over Europe and everything changed. The Yugoslav military brass cancelled a number of programs in order to prepare for an imminent war with Nazi Germany. My father, along with many hopefuls, was abruptly pulled from the aviation program and assigned to the army. Within a year, Hitler’s Germany declared war on the Allies, and Yugoslavia, though a small and independent country, was swept up with the rest.
In the spring of 1941, my father’s battalion was sent to stop the advancing armies of the Blitzkrieg. Preposterous. The Germans had armor-platted tanks and modern aircraft, while the Slovenian army pulled guns mounted on horse-drawn wagons and flew out-dated airplanes. His entire battalion was abruptly stopped on the outskirts of Belgrade, the capital. Faced with a formidable and superior foe, the commander had little choice but surrender. Not a single shot was fired and all were taken prisoner.
My father was not only confined in a German Stammlager, but he was forced to assume a new identity: POW #74324 . Camp Neubrandenburg, in northern Germany, housed Yugoslav, French, English and American prisoners. Caucasian, blue eyed, blond, and fluent in German, he stood out like a sore thumb. It took him some time to convince his fellow barrack mates that he wasn’t a spy.
My father was eventually released and sent back to his home town, so that as a man of German/Austrian descent, he could be useful to the German war machine. Fortunately, he was never conscripted to fight along-side the German army, though many “repatriated” Yugoslav soldiers were forced to don a German uniform.
Many would call it luck, the fact that he was never forced to enlist. Still, he believed in providence, in a power higher than the Third Reich. He survived and kept his war-time exploits mostly to himself. He would occasionally, over a glass of beer, recount some of the stories, choosing to dwell on the lighter side of life. But it wasn’t until years later that I paid much attention to them. I knew where our family had come from, but not of the communist repression or the hardships my parents had to endure.
When I probed further, he would open up and actually elaborate on some of his war-time experiences. I realized that it wasn’t all fun and games, unlike the light-hearted drama depicted on a former Hollywood TV show, Hogan’s Heroes. Dad didn’t particularly like the show, because it portrayed the German troops and their commander as inefficient, inept and stupid. But that wasn’t how he remembered the German army that he had personally encountered. They were far too efficient, regimented and driven by ambition.
Still, what stood out for me was my father’s integrity and sense of fair play. He recognized that men will do all sorts of things when pressured by corrupt and evil regimes. He didn’t personally hold things against those who had wronged him, even after the war, in post-war Yugoslavia. He and my mother endured much, sacrificed relationships, and risked all to flee a corrupt communist-run government in Yugoslavia, with the hope of starting over in their new-found country of Canada.
I’m forever grateful they had the courage to leave Yugoslavia, their homeland, and start afresh. It certainly wasn’t easy. Later, with my father’s blessing, I collaborated with him and wrote his memoir, POW #74324. Strangely though, he didn’t think it was worth telling. I beg to differ, because I got to know him as a young man, full of hopes and dreams for the future. Even though he wasn’t perfect, I began to fully appreciate him as a man, the struggles he overcame, and the man he turned out to be.
Sadly, my father has passed away. However, the story need not end there. After all, I have his testament, his testimony, all there laid out on paper, compiled in a book that we co-wrote. So, whether it’s on his birthday, a special occasion, or on Remembrance Day, I can reminisce about him, the role model he was to me and the legacy he left behind for all to see.