Through the Eyes of a Child – Denise M. Ford

As I let my thoughts dwell on the Easter story, I kept seeing images of Jesus with children who although they aren’t mentioned in the scriptural Easter story, are surely there, wondering and observing what was happening. Listening and hearing, on the periphery of it but part of the story. I read the scriptures to understand how Jesus fully immersed himself in protective and tender loving actions when he became aware of children who needed him. I pictured myself as a child next to him being gathered close to him, at his feet, by his side, in his arms. Just as our loving Lord often sends his comfort to children today as they try to make sense of death, I believe Jesus drew near to those children of his time and explained his death to them in a loving and tender way.

Through the Eyes of a Child…
I squeezed through the doorway and nearly bowled over a woman kneeling in prayer as she sobbed. I tucked myself amongst the robes of a group of tall men so I could move unseen with them. I had to cover my ears as the shouting and crying rose in a crescendo. I felt dizzy as I strained to see what was happening. Then I heard his name, Jesus, Jesus.

Untangling from the robes I felt myself falling backwards. I rolled into a ditch and pulled myself to its edge. At least I no longer could be wrenched inside by adult hands. In fact, no one seemed to notice that I had disobeyed the firm command my father had given this morning, “Stay inside today, no matter what you hear, stay inside, do not step beyond our doorway.”

He had thrust my hand into my sister’s, grabbing ours together in a firm clasp as he inhaled a long steady breath. His hands rubbed over ours, his head bent over us. I thought he would pray, but instead he breathed heavily again, embracing my mother as she came near him with my baby sister against her shoulder.

“You will stay inside today, and I will return as soon as I am able.”

Then the pounding on our door had begun. My older brothers had thrown it open and practically dragged my father through it. That’s when I had quickly made my escape. I didn’t want to stay behind with the women. Now outside in the ditch, I wished I had followed the command to stay inside. For here before my eyes struggled the very same man who I had seen riding on a donkey a few days before. I had happily weaved in and out of its plodding path joining with the joyous songs of our people. “Hosanna, Hosanna!” had rung out loud and clear. I had waved a palm so close to his face it had seemed that he may have laughed with me as he looked my way. He motioned for me to come closer and I eagerly ran next to him, swishing my palm alongside the donkey’s hind legs. He had glanced behind and nodded as he gave another hearty laugh.

Could this be the same man?  This man dragging a wooden cross before me. I scanned his face for any resemblance, but all I could see were streams of blood trickling down from a crown of thorns. His eyes, if only I could see his eyes then I would know if this man recognized me.

But people ran in front of me, mud splattered my face and stones began to bounce as they scattered beneath a multitude of sandals. I remembered my father’s warning, “Stay inside today.”  I closed my eyes because I no longer wanted to understand what was happening. I let the stones pummel me for a few more minutes, and then I slid from the ditch. Still trembling, I stumbled through crowds of people to make my way home, dodging past Roman soldiers, ducking under moving carts.

Back inside I found a quiet corner, and I closed my eyes. In my dream I saw him. He reached for me with a palm branch softly brushing my cheek. He nodded and gave a hearty laugh, one that I recalled from the other day. Then it felt like I was rocking gently in his arms, like he was lifting me and raising me up and up and up. I could only hear his laughter; I could only feel his love. In my dream we were next to each other, we laughed together. He stayed with me; he did not disappear underneath the weight of a heavy cross.

When I awoke again, I heard sobbing. My older brother, their wives and children had crowded into our home. Although the voices were familiar, words that I didn’t understand echoed around me. “Brutal crucifixion, it is finished, we will all die. He’s gone, it’s over.”  I suddenly wished I could return to this morning’s commanding words, “Stay inside. I will return when I am able.”  Oh, how I wanted to return to my dream. I wanted to stay inside my dream to hear the sounds of laughter and feel the reassuring love.

So many words of death. So much weeping. No one cared where I was or even if I were still here. But somehow, I knew this man would stay with me. I had dreamt of being next to him; I had laughed with him. I had been comforted by his love. But I couldn’t tell them, I was only five. I was only a child. But I knew, I knew Jesus was the man who had laughed with me, who had motioned for me to come close to him. Whose look of love I had seen again in my dream. I could only hope that he would return when he was able and that his love would stay inside me. 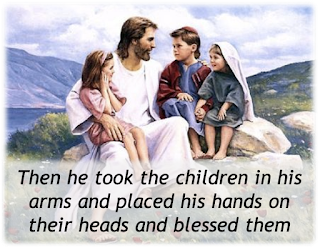 When I was five my Nana passed away suddenly. I found myself amidst grieving adults who spoke of things I didn’t understand. One night I dreamt of Nana reaching out to me, sending me a loving look while at the same time laughing with genuine joy. Even though our minister came to answer my questions regarding death and heaven, it was this dream that brought me great comfort during this time.