The Passion Through John's Eyes by Lynn Dove 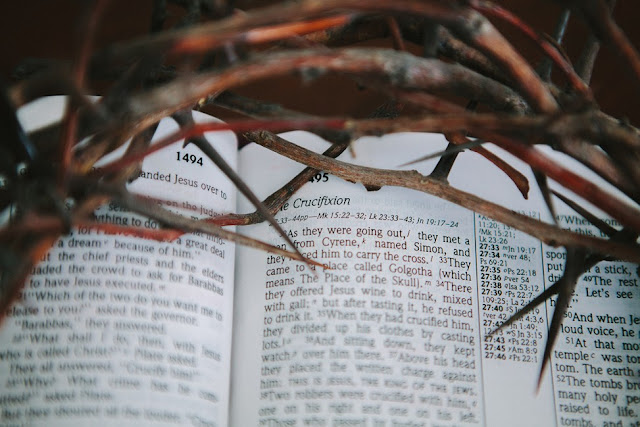 John looked out at the crowds of shouting people who had gathered along both sides of the road.  Jerusalem was more crowded than usual at this time of year, with people amassed to celebrate the Passover.  He was hidden in a doorway, shading his face in the folds of his prayer shawl.  There in the shadows he kept silent watch as the Roman procession came closer into view.  The last twenty-four hours had been spent following his beloved friend from trial to trial, always watching from a safe vantage point.  Fear overwhelmed him, not only for himself, but for his friend.


He had been there the night they arrested Jesus.[1]  He had been aroused forcefully from a dreamless sleep, initially uncertain what the noise and commotion around him was all about.  Now fully awake and under the glow of torchlights, he saw Judas kiss Jesus on the cheek in greeting and then step aside to allow a Roman guard to grab hold of Jesus’ arm.  Before John could react, another of his closest friends intervened by pulling out the knife he always carried to cut fishing line and netting, and cut the ear off of the guard trying to arrest Jesus.  John recoiled in horror just remembering the blood and the brutality of the act that night.  It had happened so quickly!  In the aftermath, he had fixed his eyes angrily on Judas, furious by his betrayal of Jesus.  Judas had jumped back just in time to avoid the knife attack.  It would have served him right, he thought, and instantly regretted thinking it.  “Forgive me, Lord,” John silently prayed as he now huddled in the shadows on the crowded street.  “You warned us this would happen.  I didn’t understand.  Even when you touched the guard and healed his ear, you showed compassion, when all I thought about was revenge.  Forgive me.”


As sweat beaded on his forehead, he peeked out just far enough to see the Roman soldiers, some on horseback, several others following behind on foot, whipping and cursing the three prisoners in their charge.  John took note of two of the men, thieves he surmised, by the derogatory taunting and stone-throwing aimed at the two.  A small wagon, pulled by a donkey carried the cross braces while the men walked dejectedly beside the wagon and ducked and railed against the crowd with uncommon bravado in the face of their inevitable death sentence.  Following much more slowly behind them, John saw his friend.


Jesus was almost unrecognizable.  They had beaten, scourged and brutalized him with unimaginable cruelty.  Tattered, flayed skin, criss-crossed his slender frame, revealing muscle and tendon.  Blood oozed and ran down his body in rivulets.  The crowd suddenly grew silent, revolted by the misery and anguish they now saw in human form in front of them.  The soldiers had spared him no quarter.  Unlike the two men ahead, his heavy cross was not in the back of the donkey-pulled wagon.  He dragged his cross upon his own shoulders despite the horrible wounds that the praetorian guards had inflicted on him.


He stumbled and dropped to his knees right in front of where John was hiding.  John winced in empathy as a crown of thorns cut jagged grooves into Jesus’ temple.  The crown, along with the seamless purple robe they had draped over him, had been yet another cruel attempt by his captors to mock the claim of Jesus being a “king”.  The guards, now impatient with this delay, lashed him with leather whips.  Some in the crowd, horrified by this, were now shouting, “Mercy!  Have mercy on him!”  Ignoring the yells, the guards continued their assault.   With super human effort, Jesus adjusted the cross on his back and slowly rose to his full height, but could not seem to make his feet move forward.  John, without thought now for his own safety, moved from his hiding place towards his friend to help him, but was held back by a soft tug on his robe from behind.  Turning, he saw her face.


Mary, Jesus’ mother, pleaded with her eyes for John not to interfere.  She held out her hands to him and with great compassion, John enfolded her in a soft embrace.  She clung to him, his arms tightly wrapped around her slender form, and then she collapsed onto him weak-kneed and weeping with despair.  John cradled her face to his chest, but she forced herself to look past him towards her son, who trudged past them now with grim determination.  When Jesus stumbled and fell again, the cross landing heavily on top of him this time, John felt Mary’s body jolt forward but he wouldn’t release his grip on her.


Exasperated now, one of the guards caught sight of a giant of a man and pulled him forcibly out from the crowd and ordered him to carry the cross for Jesus the rest of the way up the hill to Golgotha.  John, hugging Mary to his side, followed the sombre procession with the rest of the crowd, as they slowly made their way up the hill.


The sound of metal striking bone and wood resonated loudly as the guards drove the long spikes through the wrists and feet of the prisoners, securing their bodies to the crosses.  John was numb, watching the crosses being raised, one on each side with Jesus in the middle.  He watched in disgust as the guards took Jesus’ clothes and divided them into four shares, one for each of them, and cast lots for  the seamless robe.  John remembered one of David’s psalms, “They divided my clothes among them and cast lots for my garment.”[2]  Scripture was being fulfilled right in front of him!


The crowd dispersed quickly once the gruesome spectacle of the execution sentences had been carried out.  From previous experience, most people soon got bored of how long it took for prisoners to die on a cross.  It was not long before John realized that he and Mary were amongst only a handful of others who remained at the foot of the cross.  He glanced around and saw Jesus’ aunt, Mary the wife of Clopas and Mary Magdalene, all weeping mournfully together, with their eyes upturned towards the face of Jesus.  John raised his own eyes and re-read the sign that was nailed to Jesus’s cross.  Written in Aramaic, Latin and Greek, all three languages familiar to John, he remembered the heated exchange only hours before between Pilate, the Roman Governor, and the chief priests during Jesus’ trial.  Pilate had finally succumbed to public pressure to execute Jesus but as a parting shot at the Jewish leadership had been adamant that a sign be nailed to the cross saying, ‘The King of the Jews’.   The Jewish leaders had complained vehemently about the wording, but Pilate answered, “What I have written, I have written.”


John looked up into his friend’s face and Jesus looked directly at him.  John shuddered involuntarily.  Even in his dismal state, Jesus was still fully aware of his surroundings and of those who had gathered around him.  Jesus painfully raised his head up so he could speak boldly.  “Woman,” he called to his mother, “here is your son.”  His eyes looked from Mary to John and then leveling a piercing gaze upon John said, “Here is your mother.”  The intent was clear.  John was now fully responsible for Jesus’ mother, Mary.  As she leaned into him, he lightly put his arm around her shoulder.  John nodded to indicate he would willingly carry out this last request for his friend.  Mary would always have an honoured place in his home.


John barely noticed the passage of time there on the hill.   Jesus conversed with the two men hanging on their crosses beside him, but John did not take note of the words they exchanged.  The hours passed.  There was little movement now from the three men.  John leaned forward to hear laboured breathing from one of the thieves, and then was startled when Jesus suddenly cried out, “My God, my God, why have you forsaken me?”  Someone murmured, “God has turned his back on him.”  John knew better.  Jesus was quoting that same psalm of David that had been brought to John’s mind when the guards were casting lots for Jesus’ clothing.  Weak from his torture on the cross, Jesus only had the strength to speak the first line but John had memorized the entire psalm too.  He had sung it as a child in synagogue.  It was so familiar to him and yet he never quite understood what the words meant until that very moment.  He softly whispered the last line, “They will proclaim his righteousness, declaring to a people yet unborn: He has done it!”[3]


Finally, as the afternoon wore on, Jesus muttered, “I am thirsty.”  So a Roman guard soaked a sponge on a stalk of hyssop plant with wine vinegar and lifted it to Jesus’ lips.  When he had received the drink, and knowing that everything had now been accomplished so that Scripture would be fulfilled, Jesus said, “It is finished.”  With that, Jesus bowed his head and gave up his spirit.


John took hold of Mary then, clutching her to himself as they wept together in anguish.  The sky grew dark and the earth trembled.  They held each other, oblivious to the world around them.  Still grief stricken, John reluctantly let go of her.  Mary, unhindered now, boldly approached the cross and reached up to touch the calloused feet of her beloved son.  John followed and warily laid his fingers upon the blood encrusted toes of his dear friend.  With an impact he had never felt before, John felt a jolt go through his entire body.  The sensation nearly brought him to his knees.  Unmistakable, distinctive words formulated themselves in his mind, so clearly he thought he could hear Jesus’ voice speak them!  He didn’t understand their meaning at first, but he somehow knew that their explanation and intent would be revealed to him in time.  John gazed up into the peaceful face of Jesus, and the words continued to manifest themselves in his heart and mind.  He would never forget them.

Lynn Dove is the award-winning author, of the YA “Wounded Trilogy”- a contemporary Christian fiction series with coming-of-age themes.  A wife, mom, grandmother, and free-lance writer with articles published in several magazines and anthologies including Chicken Soup for the Soul books, her blog, “Journey Thoughts” is a Canadian Christian Writing Award winner.  Readers may connect with her on Facebook, Twitter, and at lynndove.com