The Point in the Story - Marnie Pohlmann 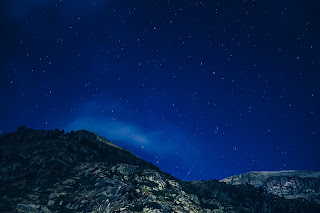 It was still pre-dawn when my companions and I were called to duty. This was my first time. I was excitedly concerned about what I would be tasked with. I was confident, though, that whatever it was I would do well. I had been held to the flame and hammered into shape. I was strong, big, and fit for duty. I was made for this day.

We were gathered at the top of a hill. The older ones among us called this hill “Golgotha” which meant “Place of the Skull” and I wondered why. It felt like a place of death, though, where spirits battled over souls. I looked at the ground on which I waited. Was that a bone fragment? Was this dirt darker than the dirt of my birthplace? Perhaps stained with blood? What did this mean for me? Why was I here?

The whispered comments and complaints of other junior consorts soon stilled as we waited. Some of the older ones had been in service here before, so if they were now satisfied to wait for action, then I would lay quiet, content as well.

We did not wait long. Soon a quiet rumble of voices became shouting and cursing that filled the air. The ground trembled with crowds pushing and shoving their way to the hilltop. A Centurion gained control of the situation with authoritative commands and the crowd parted.

I was shocked by what I saw.  A man stumbled forward, a wooden beam over his back. Blood dripped over his face from thorns that had been cruelly pushed into his brow. I wondered how the man was even standing, he looked so weak. Ah, I saw, on the other side was a strong, dark-haired man helping him bear the load.

I watched the helper lay down the rough beam and rush away into the crowd like he wanted nothing more to do with the situation. I could see why. Left with the complete weight of the wood, the blood-covered man stumbled and fell. I could see his back as he lay there; or rather what should have been his back but was only tattered bits of skin clinging to raw meat. Was he already dead? He had obviously been severely whipped.

Soldiers were ordered to push the wood closer to the hole it would stand in. Two other holes already had crossbeams beside them. The soldiers then laid the captives on top of the wood.

I suddenly realized what I was going to be part of. No! This is not what I dreamed of doing with my strength. This was degrading, disgusting work. A crucifixion of criminals was the lowest job I could have been given. Had I done something wrong? Was I not one of the best?

I stayed back behind others as some of the old and new with me were grabbed and taken to the wood. Screams and pleas of mercy filled the air, causing me to tremble in fright. I could see the feet of one thief held tightly as the commissioned spikes were ordered in. The thief was in excruciating pain and twisted his upper body trying to hit anyone nearby. Then his arms were caught and held tight as the rope was removed from his wrists. His head was forced back, so he lay on the beam and his arms were forced out from his body, stretching along the crossbeam. As the nails were pounded through his palms his screams became whimpers. There was no longer any hope for him.

The cross was lifted by a group of strong soldiers, the bottom falling into the hole with a heavy thud, jarring another scream of pain from the thief on the cross. Quickly the soldiers braced the cross in place and hurried away, their job done.

So intent was I in watching this horror I did not see the soldier come to grab me from among those of us left in the pile. I tried to slip out of his grasp, but he gained a strong hold on me. One of my mates began a tinny, high-pitched wail as he clung to other nails. I prayed I would be strong in fulfilling my duty, no matter how distasteful it became. 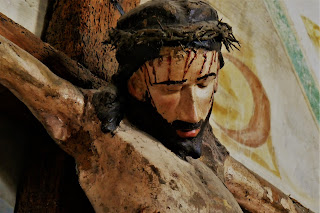 And then I was given my task for the day.  I was directed to secure the man’s right hand. Odd, I thought, as I was led to my post at the center cross. This was the man wearing the crown of thorns, yet he was not screaming. I could see he was conscious, aware of what was happening. I looked into his eyes and saw the pain, yet there was also compassion as he looked at me. I reached for his hand and it was as though he reached toward me, offering to be held by me. I shook and wished I could pull away, but he nodded ever so slightly like he was reassuring me that this was my duty and I needed to do it well.

I turned to stare at his hand and pressed my chiselled point into his weathered palm. Then the hammer fell. It struck my head, driving my newly forged body through the man’s flesh, sinking my point deeper and deeper through the hand with each blow and continuing until I was buried deep into the wood behind it. My head was exploding with pain and could not grasp what the man was experiencing. My racing thoughts stopped enough to register that he still held no hate in his eyes toward me for what I was doing, so I tried my best to give support to this man in his final hours.

A soldier climbed a ladder and tapped a sign on the cross above the man’s head. “King of the Jews,” he mocked loudly, laughing. “Crowned and standing above us all. Let’s see his power now.”

I felt a stirring in the air, as though angel guardians were rushing to the man’s side to defend him. He stretched his fingers, signalling for them to stop, to stand down and hold themselves still even in the face of this abuse.

I had heard the man’s name was Jesus. Some said he healed blind men and made the lame walk. Some said he was the Messiah. I heard that he himself said he could raise the temple of God in three days. Most mocked him, challenging him to prove he was this King the Jewish people waited for.

Suddenly darkness descended and the air grew chill. Yet it was only midday! How could this be? Strange things were happening. I knew they were significant, but I did not understand how.

In the dark, throughout the afternoon, I watched as the people who berated this man began to disperse. Only the soldiers and a few stragglers remained. Some religious men were clustered part way down the hill, not wanting to watch but apparently not able to leave, either. They seemed fearful this man would somehow free himself from my grip and leave the cross. A few women were sobbing at the foot of the cross and a young man tried to comfort them. The Centurion had ordered the soldiers to let them be, as one was the man’s mother.

Jesus, whose hand I held, spoke only a few times. He told the young man to take care of his mother. He requested God’s forgiveness of all around him. I was amazed.

Only once were his words to question his place of punishment. He looked to the heavens and groaned, “My God. My God. Why have you forsaken me?” Seeing his distress, the Centurion sent a soldier to offer the man a wine-soaked sponge to deaden his distress. Jesus refused, seemingly at peace again, and spoke once more in a tone of acceptance.

At that moment the sun burst through the darkness and the ground trembled. I held firmly to the hand of Jesus as he gave up his spirit.

The soldiers started to run from their posts, frightened by the earthquake, but the Centurion’s authority halted them. I watched as the Centurion gained control in the only way that worked with soldiers. He gave them an order, a task to complete. He ordered them to break the legs of the men on the crosses so they would die quicker. Their broken limbs would not be able to hold them up to take laboured breaths and they would soon suffocate.

The soldier who approached Jesus noticed he already appeared dead. To make sure, he thrust his sword into the side of the limp body and noted the fluid that poured out. I could feel the weight of Jesus pull against the secure hold of my position. Yes, he was dead.

I heard the Centurion speak in awe as he gazed at Jesus on the cross. “Surely this was the son of God.” His men looked at him, concerned at their leader’s strange reaction. The Centurion quickly regained his composure and commanded that the hillside be cleaned up.

A fresh group of soldiers were tasked with removing the men from the crosses. The crucified were dead, so these soldiers did not try to be gentle. They climbed ladders and tore the hands and feet of the men free of the wood, not even bothering to remove the other nails first. 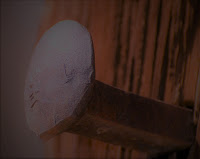 When the soldier approached me and tried to pull Jesus’ hand free, I gripped it tightly, unwilling to let go. I would not allow this man, strange as he was, to be disrespected in that way. Exasperated, the soldier finally grabbed me in a choke hold and pulled me away. While still upset, instead of tearing Jesus’ other hand and feet free, he pulled my cohort nails from the cross as well.

Jesus’ arm fell to his side as I lay on the ground in the bloodied dirt, spent from my day of work. I watched as they wrapped him in a rough blanket and a rich man claimed his body, assuring the mother he would be buried as a king and not in the field of criminals. I tried to roll onto the blanket, to remain with this man who even in death had a spirit about him that attracted me.
I had done a distasteful job, but I had done it to the best of my ability, and with compassion for the man placed in my care.

The woman, mother of Jesus, instead gathered me to her chest. I was covered in her son’s blood, but she seemed not to mind, and for some reason, I did not mind either. I was covered in Jesus’ blood and because of that, I knew I was forgiven for the part I played in the crucifixion. Somehow, I knew this day was important. This event would change the world and I had been a part of that. I remembered the look on Jesus’ face as he urged me to my duty.

Yes, Jesus truly is the Son of God.

Our Lord's forgiveness, mercy, and sacrifice truly changed the world on that day of crucifixion. As we come to terms with our responsibility for that day, and our role in the need for Jesus' sacrifice, may we also claim the hope that the resurrection day provides to us.