The End of a Pilgrimage by Marcia Lee Laycock 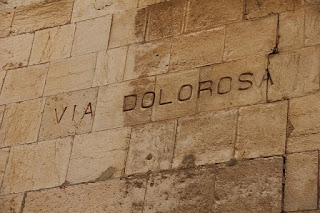 “As the soldiers led him away, they seized Simon from Cyrene, who was on his way in from the country, and put the cross on him and made him carry it behind Jesus.” Luke 23: 26

If I had taken a different way, how different my life would have been. If I had turned aside when I heard the crowd, perhaps I would never have known about this man, let alone have been tethered to him in such an irrevocable way.

I tried to resist, tried to tell the Roman guards that I was on pilgrimage, here to celebrate the Passover in a place I had dreamed about since I was a child. My dreams sometimes were disturbing, but all my life I had felt drawn to this place, this time, this destiny.

They were not concerned about my reasons for being there. They had reasons of their own.

The cross beam was heavy, perhaps all the more because I knew what it was for. I’d seen the uprights on my way into the city, knew this man staggering in front of me would soon be pinioned on the two beams nailed together. Crucifixion, the cruelest of Rome’s devices.

But it wasn’t the weight of that wood that made me groan.

It was the look he gave me when he raised his head and looked at me, as they forced me to carry it. A look that seemed to say, this will be hard, but come, my son, do this for me and you will never be the same. I tell you truly, even if those Romans had not forced the beam onto my shoulders, I would have carried it for him. After just that one look that felt more like a longed-for embrace, I would have carried it and let them nail me to it. I would have died in his place.

And I didn’t even know his name.

It wasn’t until we reached the place and they shoved me back into the crowd that I began to ask the questions that burned in my mind and heart. Who is this man? What has he done? Why do the crowds scream for his death?

The answers were spat from snarling lips. A rabble-rouser, a zealot, one who incited the people against Rome and caused all manner of harm to come to those who live in Palestine. The answer from the Jews was the one that tore at my heart: blasphemer. One who dared called himself God not only in the streets and on the mountain sides but in the very synagogues where true faith is taught.
But as he hung there, he looked at me again and I knew none of it was accurate. This man was no zealot, no rabble rouser. And if he called himself the son of God there could be only one reason – because it was true. I stared at him and could not comprehend how I knew these things. My pilgrimage had come to an end at the feet of a bloodied human being, a mere man, he seemed, who saw into my very soul and gave me everything I’d ever searched for, longed for from the depths of my being.

I watched him die and knew in those torturous hours he was giving me life.

Yes, if I had taken a different way, how different my life would have been.
****

Visit Marcia's website to learn more about her writing/speaking ministry.