On days when I wonder if this writing avocation aligns with God’s will for me, I recall a specific time when I received an affirming vision.

It happened at a Holy Spirit conference that my husband and I attended. The event encompassed a weekend that included various ways to help us listen and hear how God might be speaking to us. Participants divided into small groups to discuss the context and meaning of scripture, and to share our responses and images from visualization exercises. In one guided session we reviewed specific scriptures before pausing to become introspective about a serious situation or condition in our personal life.

At the time I needed discernment on whether or not I should attend a large writing conference. It would include an opportunity to meet with a publisher for a book proposal review. My husband sought input as he considered setting up his own company as a way to regain purposeful employment.

Just prior to this break-out session an emotionally charged worship period primed our hearts and minds for the prospect of receiving the Holy Spirit’s insight. We had raised our voices in songs of praise to express our adoration and gratitude, and in prayers of forgiveness to admit our weaknesses and fears. We now approached this contemplative activity with hopeful anticipation for what might unfold for us.

The instructor directed us to put forward our concerns and submit to the Holy Spirit’s guidance.

My husband described the picture he received as his participation in a game of chess. He felt calmed and relieved to know that a guiding hand prompted his every action. He explained that he could see precise and specific pathways each time he pondered his next move. He knew which piece to play because the way was prepared for him. Anxiety and apprehension left him so that he didn’t wonder what might happen after his completed turn. He accepted this image as a reassurance that God would provide him with the wisdom to establish a business venture and the knowledge to access a client base.

Surprisingly I found myself in a vision where I was lined up at home plate in an old-fashioned game of kickball. This felt shocking to me because when I had played this game as a child, I would often display my lack of coordination to the amusement of others!  I would run up to the plate as the pitcher rolled the ball towards me. I would swing my leg backwards readying my foot to take the brunt of the pitch, trying to connect in a fluid motion to that barreling ball. I wanted to lift it up like a rocket for a clear take-off towards the outfield. In reality my foot would graze the flying sphere and I would usually slip while losing my balance in a weaving, wobbling motion. Sometimes I managed to sideswipe the ball as it zoomed into my vicinity, but then I would have to race to first base before a fielder threw the ball into my back. Ugh, I definitely disliked kickball. Instead of being fun, it made me feel beaten down and defeated.

But there I was in this vision, lined up and ready to attempt a kick. When I looked up to stare down the pitcher, I saw Jesus spinning the ball in his hands, tossing it up in the air; catching it and giving it a powerful whirl down the center line. That ball flew at me with an intensity that made me want to jump out of its path. Except that didn’t happen. This time I ran towards the plate and enacted a simultaneous burst of kicking power as the ball entered the plate zone. I swung my foot with precision and a finesse I didn’t know I could achieve. That ball hit my foot and my foot hit that ball. It went soaring in a beautiful upward curve that arced high above the opposing team players and travelled into the far corners of the outfield.

As I reviewed this vision, God’s answer seemed to depict that Jesus would inspire my ideas and empower my words if I brought myself to the writing desk. My doubts about whether or not I can write would be overtaken by a cataclysmic explosion of creative power. The Holy Spirit would provide the enthusiasm for me to enjoy and play a part in this writing world. If I show up to the plate, He will pitch the ideas to me!

For me this translates to the concept that the Holy Spirit illuminates my thoughts. My imagination becomes powered by His illumination. I try to prepare my heart and mind as often as I can, so I am primed for my turn at the plate. I eagerly put myself into the line-up, at my writing desk, so that I am ready to take the pitch from Jesus!

I offer this vision to you, fellow writers, for we belong to a team of scribes, who hope to illuminate and share our faith to others. May this kickball scene bless you and encourage you! 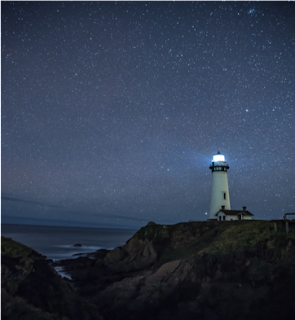 “Here’s another way to put it: You’re here to be light, bringing out the God-colors in the world. God is not a secret to be kept. We’re going public with this, as public as a city on a hill. If I make you light-bearers, you don’t think I’m going to hide you under a bucket, do you? I’m putting you on a light stand. Now that I’ve put you there on a hilltop, on a light stand—shine! Keep open house; be generous with your lives. By opening up to others, you’ll prompt people to open up with God, this generous Father in heaven.