Give Yourself an A ... by Jocelyn Faire 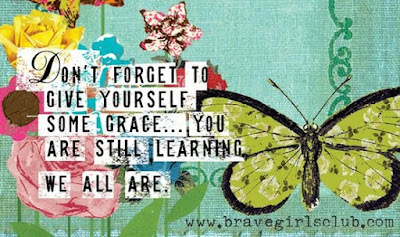 Aging has a way of turning conversations philosophical. Over coffee and amazing orange buns (a Mennonite specialty), girl-friends and I pondered ongoing concerns that too often we still measured our personal value by appearance and by accomplishments; and we're all retired. I referred to a book I'm reading by Rosamund Stone Zander and her husband Benjamin Zander—The Art of Possibility—which introduced me to the practice of giving myself an A. In summary, the author talked about a graduate level performance Arts course he taught. Over the years he felt students were so focused on comparisons with one another and with test results, that they failed to give themselves the freedom to explore their own creativity. He and his wife developed a unique approach: at the start of the semester he informed his students that they would receive an A for the class ... the only requirement was they needed to write him a future-based letter, dated the following May to say why they had earned their A. He was particularly interested in their development as people ... Then Sharon asked me “So, what did you say in your letter to earn your A?” I was stumped. I had been pondering the question, and that afternoon, I came up with my response. I know I'm not alone as a writer dubious of the words she puts to paper. In my letter, I did not need to say I would be published. As the author says: This A is not an expectation to live up to, but a possibility to live into.
Walk with me and work with me—watch how I do it. Learn the unforced rhythms of grace.(Matt 11:28-30 The MSG) 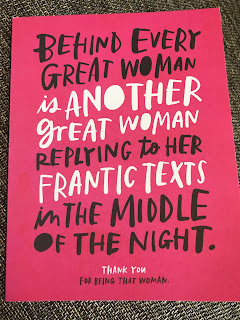 The second A came from my daughter-on-the-planet. For the first time in nearly a decade, she and I were together for Mothers Day. Sipping coffee on a riverside bench she handed me the best card possible.(pictured here) The last line in small print says, Thank-you for being that woman. We laughed and laughed. She does send those frantic texts, ranging from kid needs to meeting with outreach contacts, to mission related concerns. and I pray these requests. The last line says: Thank you for being that woman. This A is for all the times we send encouraging words and prayers at just the right time, in response to a quiet nudge.
Sometimes it's the things we say that encourage people, but it can be the things we don't say that are just as important. Here's an A for silence ...
Early June, my husband and I were on a birthday(his) road trip around Lake Superior. While driving the south shore, his phone rang. No, it was not a Happy Birthday call; it was the auto insurance company saying that they had checked the car his son was driving and deemed it a write-off. Well, this was news to us, as Kyle had not even let us know about an accident. When did this happen? we asked. Four days ago. Clearly, Kyle was ok. Clearly, Harold was annoyed. He had loved that 1999 Honda and driven it carefully from the day he bought it. And now it was being written off, five months after his later-in-life-adopted son took ownership. This isn't the first car he's ruined, he bemoaned. I wondered if I needed to gently remind my husband of two and a half years, that only four days earlier he had backed into a tree with our camper unit. The unit was fine, but both bicycles in the rack were rendered quite undriveable. That happened the first day of our trip, and that was my fairly new best bike ever that I'd spent a reasonable sum of money on. Hmm, I note with interest it was the same day as the autopac claim. I would hold that information for now. Harold is a careful driver, admittedly driving like a Grandpa at times, and Kyle is not as careful, driving more like the 23-year-old he is ... I had remained quiet about the bike incident, as I knew he was upset with himself for having done it ... Where did that tree come from? It was in my blind spot ... [Yes, but the tree didn't back into you, you backed into it. Fortunately, these thoughts remained in my head.] Kyle had sent us one text in the meantime on a totally unrelated issue, but failed to mention he totalled his dad's car? It was surprising and disappointing. (But, so was my bike) As I reflect on Grace and my own unmerited favour, it becomes easier to extend it to others. I gave myself an A for keeping my words to myself.
Try making your own list of why you deserve the A, and counter the voices that continue to give D's only. All too often we are quick to criticize ourselves, and then I remind myself that in Ephesians 2:8/9 it says we are saved by gifted Grace, not by our works. It's like God gives us an A in advance!!

Email ThisBlogThis!Share to TwitterShare to FacebookShare to Pinterest
Labels: Benjamin Zander, encouragement, Eph. 2:8/9, Give yourself an A, Rosamund Zander, The Art of Possibility