Some Type of Crazy - Whitney Braun 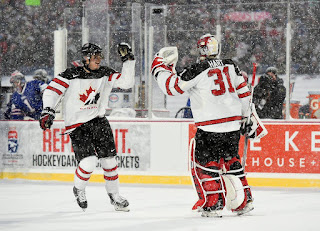 “You’ve got to be some type of crazy to do something like that,” my grandfather mumbled at the television. My husband and I looked at each other with knowing eyes. We were that type of crazy.

It was the week between Christmas and New Years of 2017. My side of the family was gathered around my grandparents’ living room watching the very first outdoor hockey game of the World Juniors Hockey Championship. Canada and the USA had one period left to battle it out. Over forty thousand spectators sat around Buffalo’s football stadium to watch the rink down below. It was a blizzard with subzero temperatures, yet the stands were full—warmed only by the love of the game. I guess my grandfather’s love of the game wasn’t as deep as theirs.

If my husband and I had the means we would’ve been there at that very game. The year before, we attended the tournament in Montreal, walking four kilometers in -24 wind chill to and from the arena. We had a blast.

I looked to my grandfather, and before I could stop them, the words just stumbled out. “But wouldn’t it be boring if we were all the same?”

It got me thinking about the passage in 1 Corinthians. For the body does not consist of one part but of many. We all play a part in making up Christ’s body. Those spectators in their parkas were as much of a part of the puzzle as my grandfather and the rest of us lounging in his temperature controlled home.

Often we find it easy to look at someone and gasp when they tell us they haven’t read a single book in a decade. Or, we might tsk at another for using the wrong punctuation in a Facebook status. But here’s the thing. They might be thinking the same thing about us. We are all some type of crazy.

Let me go get my toque—it’s game time.