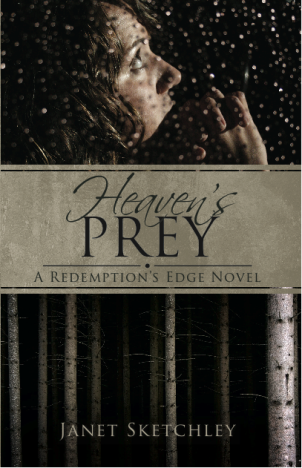 One of the topics of my recent fiction class was the "occasion" or "destination" of a novel and how to keep the reader reading if they know what's going to happen. As I read Janet Sketchley’s novel Heaven’s Prey, I thought she illustrated this perfectly. We know the novel is about redemptions—presumably Ruth’s physical redemption and Harry’s spiritual redemption—but we read to find out how that happens. How does Ruth survive being kidnapped by a serial rapist? How does a guy as dark as Harry move toward redemption?

Ruth is an ordinary middle-aged woman living in Nova Scotia who has been praying for Harry Silver since he kidnapped, raped and murdered her niece. Prayer has helped her find healing, but it has also caused a rift with those around her—including her husband—who don’t understand how she can pray for a murderer. She’s on her way home from her weekly prayer meeting when she runs into Silver himself. Now, all her faith is put to the test as Harry kidnaps her and plans to make her his last victim…

I appreciated the fact that, even when Janet was writing about Harry’s crimes, she never made it graphic. We are given enough detail to know what happened but not so much that the crime is sensationalized. Yet these scenes never felt like the author was intruding by withholding information. Ruth talks about reading crime reports, about the horror she experienced in learning about Harry’s crimes, and her fear and disgust towards him gives the reader a bigger picture of Harry. At the same time, Ruth’s faith allows her to see Harry in another light.

Janet’s novel reminds us that even those we hate and despise are still human—and still loved by God. Harry is truly dark and despicable at the beginning of the novel, but Janet slowly takes us into his past, into the pain of his childhood, his pornography addiction, and his racing career, and we see the path that led him into darkness. It doesn’t excuse his crimes, but it helps us to understand him. I think it takes a truly skilled writer to make Harry neither so evil that he’s past redemption, nor so redeemable that we don’t believe he could have raped and murdered nine women.

To get a taste of the story, you can check out the Heaven’s Prey Blog Chase. At each stop in the chase, you’ll get a short “prequel” of the novel, some insight into what happened before Ruth encounters Harry. You can also drop by Janet’s website to read interviews with the characters and with Janet.

Janet Sketchley is a long-time member of Inscribe Christian Writer’s Fellowship; she served as acquisitions editor of FellowScript and wrote the fiction column for many years. She is passionate about fiction, but also has a nonfiction story in the award-winning anthology A Second Cup of Hot Apple Cider. She calls herself “a Christian growing in faith, trying to balance relationships and responsibilities.” She is currently working on the second book in her Redemption’s Edge series.