Guest Post - The Clarity of God's Whisper by Wally Pohlmann 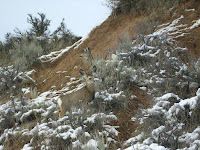 Walking the game trails in the hills of the Okanagan valley, I had “jumped” several deer. I was only able to gain a glimpse of my prey as they casually sauntered away.

There was no indication they were there, no sound that I heard before they decided to leave my presence. They had been aware of me for a while, I was sure, staying put until I got too close.

I had a problem. I was loud, and the trails were covered with small broken branches, dry pine needles, and leaves from the low bush. On some of the hillsides, the rocks seemed to constantly fall down the slope, gathering friends along the way, loudly welcoming my arrival. I was so loud I wondered if I could ever get close enough to the game I chased when all I heard were my own footsteps and the scrape of branches on my clothes. It was true the rocks and trees can cry out. They shouted about my presence to every deer in the area as I walked, climbed, and stumbled my way along the hillside.

Mid-morning, I took some time to sit on an old stump for a breather in the middle of an old clearing, cut many years before. While having a drink from the thermos I carried and a bit of cheese to eat, I watched a fog rise from the valley. The mist slowly climbed the hill towards the clearing, and I remember thinking it looked thicker than the proverbial pea soup. 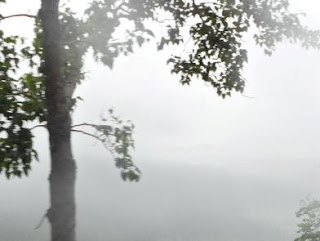 As I sat on my stump this fog continued up the hill towards me until I was enveloped in the milky white of some of the thickest cloud I have ever been in. I could see, possibly, eight feet of the ground before it disappeared into the white nothingness. To move would not be wise, as I was aware of the slope and the sheer drops that accompanied my noisy walk when I could see, and at that moment I could not. So, I had another cup of coffee.

While I sat, I noticed the sounds of the morning which had followed me seemed louder, more distinct. I could not only hear the squirrel that seemed to dog my footsteps all morning, I could almost point out the branch he presently watched me from, even in the state of blindness I found myself in.

Minutes into this forced interlude I heard the footsteps of a deer coming in my direction, and even though I knew it would need to come within the eight-foot radius where I could see, I still prepared my rifle. On the steps came. My prey came closer and closer. I listened as the mule deer hesitated, then took a few more steps. I thought that if I just had arms that were ten feet long, I would be able to touch it. I did not have the arms, and I did not get a shot at the deer, as the sound of his footsteps receded. The fog lifted slowly, and I found myself once again alone in the middle of the clearing. The tracks of the deer were right there in front of me at about fifteen feet, and I had seen nothing.

This is how God has spoken to me as I have stumbled and staggered through life, as much a rookie Christian as I was a rookie hunter then. I make too much noise as I stumble around in blindness.

When I was fired, the polite term is laid off, for the first time in my life, we had two mortgages, teenage kids, and even when we cut every expense we could, we were still giving out more than we were taking in. I spent a time or two in the garage making more noise, again.  I tromped around in my self-pity, frustration, and anger. “Why me?” I prayed, loudly. “I considered, and I took the risk I thought you were asking me to take, and now what will I do?” I yelled a lot, and then I fell into a deep, dark hole. I stopped yelling in the garage and began the noisy outcry called depression. The noise I speak of is the constant buzz of a mosquito in one’s ear. It was made up of whining, crying, bargaining, and negotiating with God about what I thought should now happen since God hadn’t held up His part of the bargain I thought we had entered into, all wrapped up in a neat package called “What now?”

I was once again on the hunt, but everything I tried was spooked before I could even get my sights on it as I traipsed around in my mind. And then it happened. I sat on another stump and watched the fog once again roll in until I could no longer see anything, but it was then that the noises became defined. I could no longer move. I simply had to sit quietly until this fog lifted and I could once again proceed on my journey. But it was also in that moment that I heard God’s voice. He approached, just as the sound of that deer’s footfalls suddenly made their appearance and grew louder and clearer until I felt I could reach out and touch Him.

I still make too much noise. I walk too loudly and scrape through the bushes of life, announcing where I am. The stones I kick still rattle down the incline of life as I struggle to climb up. But I stop more now than I ever have, and I listen more. I find my voice is also still too loud while my whispering thoughts must sound like a prairie freight train rolling past God’s ears. So, he waits. He waits until I stop talking, stop walking with my purpose, stop stumbling around in my life so certain I know the path He has for me. That is when I can hear God give me the direction I so desperately need.

Wally Pohlmann pastors a small-town church in northern British Columbia. He enjoys hunting, golf, motorcycles, and always has time to share a coffee.