Get Out of Town! - Bruce Atchison

I heard no voice nor felt a powerful compulsion. Leaving Edmonton's noise and rude neighbours behind made logical sense after suffering seven years of churlish neighbours and flatulent vehicles ruining my repose.

Of course it was God who arranged everything. My mother was in the mall one day in April of 2000. Seeing a new real estate office, she began chatting with a woman there.

I happened to be talking to Mom on the phone about my perennial neighbour problems when she mentioned her conversation with the realtor. That's when I asked her for the agent's name and phone number.

The woman I contacted showed me around several little towns. The houses there were either too expensive or not what I needed.

In the interim, I prayed that if God wanted me to buy a house in a small town, I would also need access to a grocery store and post office. I also asked for a house with no nearby neighbours.

Radway was the perfect place for me. The house I toured had no neighbours close by and it sat across the railway tracks. It had been on the market with no offers put on it since 1997. 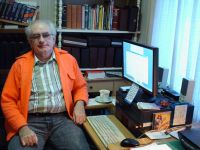 Another of the Father's plans fell into place when I received a large payment from Ottawa. The union filed a court case against the federal government because clerical workers weren't paid as much as similar workers. The court ruled in their favour and I immediately put the money in my account.

And since nobody put an offer on the house after a few days, I bought it. Most of the money paid for my down payment and I also put in a septic field so the tank wouldn't need pumping every two weeks.

After twenty wonderful years, I still love this little house. I can write and rest without noisy neighbours and city traffic assaulting my ears. Like Abram, I found my "promised land."