It Is Finished - Mid Month Moment 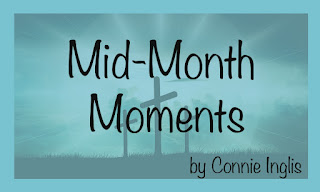 As writers/artists who have slaved over a song, a poem, a speech, a book, or a painting, sometimes our favourite words are, "It's finished." And yet, until it's finally out there in public, we can still correct mistakes, add touch-ups, or do any number of things to improve what we've "finished." (And even then, if it's writing, we can make changes in future printings).

Yet, there is one, "It is finished" proclaimed over 2,000 years ago that, when spoken, completed the task once and for all--and for all eternity.. Of course, I'm referring to Jesus' last words spoken before He died on the cross. In John 19: 28,30, the root word telos in the Greek, is used not just once but THREE times:
"Later, knowing that all was now completed (teleō), and so that the Scripture would be fulfilled (teleioō), Jesus said, 'I am thirsty' ... When he had received the drink, Jesus said, 'It is finished (teleō).' With that, he bowed his head and gave up his spirit."

According to the Bible Study Tools website (https://www.biblestudytools.com/lexicons/greek/nas/telos.html), the definition of telos is:
1. end

Oh the depth and weightiness of Jesus' word choice!

Firstly, consider the limitlessness of this act. The verb choice is in perfect tense which, in the Greek, means it is a past action but the effect of it continues into the present. So, within our time-conscious world, the significance of His death continues NOT just until the end of time, as we know it, but into eternity. Wow!

Secondly, it was His last act in a series of acts that began when He "emptied himself, by taking the form of a servant, being born in the likeness of men. 8 And being found in human form, he humbled himself by becoming obedient to the point of death, even death on a cross." (Phil. 2:7,8 ESV) In celebrating Christmas, we are celebrating Jesus' first act, His incarnation, which culminates in this, His final act.

Thirdly, Jesus' final act, this climax, closes the need for any other following acts. His blood was spilled so that no other blood sacrifice needed to be offered to appease a holy God. His blood made a way for us to be forgiven and redeemed. There was no other way. Jesus had to die to satisfy the demands of a righteous God, which then made a way for us to be reconciled to Him (propitiation).

Fourthly, everything Jesus did while on Earth, led up to, and was connected with, this final act. It was, "the end to which all things relate, the aim, purpose." In Mark 10:45 Jesus says, "For even the Son of Man did not come to be served, but to serve, and to give his life as a ransom for many.” And in John 12:27 He says, "Now my soul is troubled, and what shall I say? ‘Father, save me from this hour’? No, it was for this very reason I came to this hour."

And so I repeat: Oh the depth and weightiness of Jesus' word choice!

My prayer for us this week is that, with the beginning of Advent, we will ponder anew ALL that Jesus has done for us. May we not take lightly Jesus' final words: "It is finished." May we fall at His feet as sinners in need of a Saviour, thanking Him for the indescribable gift of His birth, His death, and His resurrection. And may we not lose sight of that in the busyness of the Christmas season.

With a grateful heart,
Connie