The first book I wrote was in a brown Hilroy scribbler: rags-to-riches meets Little House on the Prairie. Every evening I would write a little more; every morning I would get on the school bus and tell my seat mate, Rhonda, all about my life as a writer. It felt so glamorous.

The little, brown, hand-written novel was heavily edited. Perhaps a better word is “redacted.” I second guessed two or three pages and obliterated everything with ball-point scribbles. Looking back, it was rather a violent process. I don’t remember telling Rhonda about that. Not very glamorous.
Who knows where that scribbler is today. I remember showing it to my mom and my aunt and probably my grandma – all the women who lived on our farm. I remember them praising it. But I don’t remember where it got to. Sigh. It could have been a best seller. Of course, inspired by Laura Ingalls Wilder, it could have been an instant classic. Now we’ll never know. 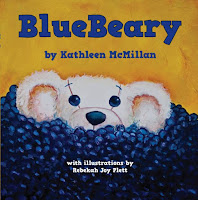 The first book I published was written by my friend Kathleen McMillan. (I interviewed her for the Winter 2018 FellowScript.)  She and I had gone on a private writing retreat—just the two of us—to a cottage in the Okanagan. She was working on an adult novel and I was crafting a song to record at the end of the week. We worked quietly alongside one another, and in between we would cook and eat and talk. Kathleen is a preschool educator who loves to tell stories. She told me about this story she had written, inspired by two of her students, about well-loved bear who goes on adventures and gets into lots of trouble.

My strategic strength started pulsing and I said to Kathleen, “I think we could publish this.”

That was the end of May. We started planning. We used Facebook to gather applications for an illustrator and chose one who went beyond our dreams. We got a quote from Friesens Printers in Altona, Manitoba. Friesens helped us set the timeline. Kathleen took out a small loan and bought a domain name, www.openeyes.ca; I designed a website. I had been working for a small-town newspaper, so I was able to do the layout in Adobe InDesign. I discovered that ISBNs are free in Canada, so registered and got an ISBN. I wish I could remember how I generated that lovely bar code. All bar codes are not created equal! Maybe Friesens provided it. (In the middle of all this, I met and began dating the man I would marry.) I organized a photo shoot and designed some promotional materials. By the end of July, we had our first print run, the first in a series of books about BlueBeary. Kathleen hosted a launch with her preschool, visited blueberry farms in the summer, and we both spoke at schools throughout that year to promote it.

Now I know that publication timelines rarely go this smoothly or this quickly! Beginner’s luck? The grace of God? Definitely the latter! We didn’t really know what we were doing, but we sure had fun in the process!

Unfortunately, we ran out of marketing steam before we ran out of books. They still sell, but very slowly. Very few things sell themselves without some help.

It might be too late for the brown Hilroy scribbler, but I think it’s not too late to generate new interest with a clearance sale on BlueBeary books and then maybe even continue the series. What do you think? 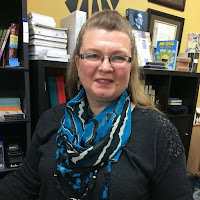 Colleen McCubbin is the founder and Chief Creative Officer of Siretona Creative (www.siretona.com). She has been writing since elementary school, with her publications being poems in the Young Cooperator pages of The Western Producer. She has gone on to write songs, record two albums. While she enjoys writing her own material, she loves editing and publishing other people’s work. So far in 2018, her publishing company has worked on at least seven projects.