A gourmet banquet meal comes to mind when I think of the InScribe Christian Writers' Fellowship Fall Conference 2015. I had the opportunity to worship God, be challenged, encouraged, motivated, and equipped. Today I'd like to share some highlights by way of pictures.
This year we, as an executive, decided to have a pre-conference session on Thursday afternoon. Jeff Goins not only challenged us to figure out what God wants us to do personally, but also encouraged us to consider how we could meet each other's needs as a community of writers. He encouraged us to think about ways our passions and skills intersect with what people need and want. He also challenged us to share our needs with our InScribe community and see how God could meet those needs through other people we know.

On Thursday evening we had a delightful time of sharing and celebrating. Many authors shared a piece they had written by reading aloud. Irish Beth Maddock delighted us with her cat shoes and her charming children's book, The Great Carp Escape. We were thrilled to celebrate Melanie Fischer's launch of her book, Ya...But How? Connie Inglis received the prize for our inaugural art contest and we all benefitted by receiving a beautiful journal with her picture on the cover. 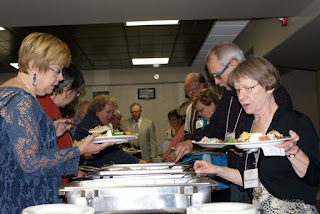 The Sawridge Inn and Conference Centre provided a welcoming environment which many attendees commented on. The weekend flew by all too quickly as we enjoyed a wide array of quality workshops, browsed the many tables of books available for sale, ate delicious food, renewed friendships, and networked.

NON-FICTION ESSAY (Contemporary issue from a Christian perspective)
FIRST – “Abortion: Canada’s Unfinished Debate” by Sharon Espeseth of Barrhead, AB
SECOND- “Connecting the Dots” by Violet Nesdoly of Langley, BC
THIRD – “Until Death Do Us Part” by Nina Morey of Saskatoon, SK

POETRY
FIRST – “If Only” by Sharon Cavers of Cavan, ON
SECOND- “Like a Mustard Seed” by Alvin Ens of Abbotsford, BC
THIRD – “He Was Trouble” by Connie Inglis of Edmonton, AB
HM – “The Pebble” by Katherine Hoffman of Edmonton, AB

DEVOTIONAL
FIRST- “Remember” by Ramona Furst of North Bay, ON
SECOND- “Monkeys on My Back” by Marnie Pohlman of Taylor, BC
THIRD – “Trust Your Pilot” by Janet Seever of Calgary, AB

We celebrated the launch of the paperback edition of 7 Essential Habits of Christian Writers on Friday night after the banquet.

I'm grateful for the volunteer team of people God has brought together to serve on the InScribe Executive for 2015-16:


Pray that God will continue to use InScribe to encourage and equip writers who are Christians! 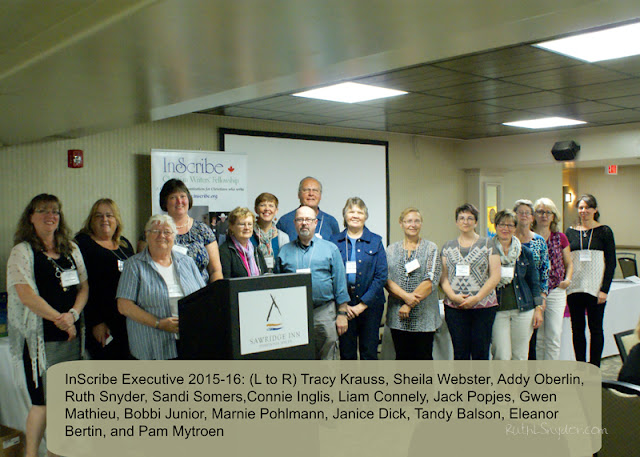