On my heart... By:Vickie Stam 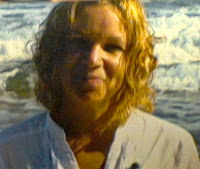 With all of the social media in the world today one might think I would have learned to let my hair down, relax and express myself, but I'm just not that comfortable yet. I have to admit, I'm a little envious of people's ability to openly share the breathings of their heart without leaving even the smallest details out. The truth is, I came from a family where I was expected to be "seen and not heard." I was forbidden to speak my mind, discouraged from sharing my opinion and told to play quietly and sit quietly. It comes as no surprise that most people who know me well, describe me as someone who is "quiet."

I would describe myself as someone who has found her voice but often shivers at the thought of using it.

Still, not that long ago, Facebook was merely something my friends talked about. I never would have considered being a part of this social network until my sister convinced me this was a good thing. "You'll be able to see the pictures I post from where I live in Prince Edward Island and we can message one another too." "It's a great way to stay in touch." she said.

The photos she posts are beautiful and I do enjoy sending her messages. But then there's that box that calls me, the one that asks..."What's on your mind?" It stares at me every time I log into Facebook, just waiting for me write something...anything. I gaze at it as though it were some sort of test. So every now and then I coax myself to share something.

In fact, not so long ago, in that very box, I shared how much I've enjoyed the privilege of writing for InScribe's on-line blog for over a year. No one so much as hinted that they've even read anything I've written on InScribe nor did they even ask about InScribe itself. I'll be honest, there was a part of me that was breathing a sigh of relief. All the feedback I receive from my friends at InScribe is always kind. Very encouraging! But, will I receive the same from my friends on Facebook?

I write almost daily. My journals hold the breathings of my heart and when I'm ready to share them whether on Facebook or someplace else, God will open the door for me and tell me-- it's time for you to breath.

Email ThisBlogThis!Share to TwitterShare to FacebookShare to Pinterest
Labels: Breathing from my heart, By Vickie Stam, Vickie Stam