No Turning Back - Marcia Laycock 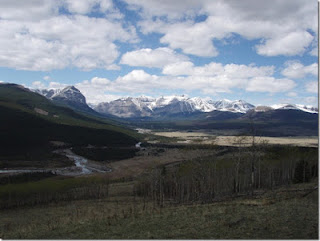 Another blank page stares me in the face; or a chapter needs to be edited and made more concise; or an article that's only half a page needs to be four. The challenge of writing - you climb to the top of a mountain and discover there is another obstacle waiting.

It reminds me of a riding trip I did once, into Alberta's Rocky Mountains. I was with an experienced guide and our first few rides had been great. Then on the third evening he proposed a challenge. "I'd like to go up to the highest peak tomorrow," he said, "but it's a long ride, six hours at least, so who's up for it?"

Four of us headed out right after breakfast. As we approached a fast-flowing river our guide cautioned about not staring at the swirling water and what to do if we fell off. I was relieved when my horse lunged up the far bank with me still on his back. Then we began to climb. I looked up and thought, wow, that's one big mountain and we're only just starting; then, hmm, we're almost half way up; then we were leading our horses up the last steep incline to the very top. It was exhilarating to look out at that 360 degree view. But our guide told us there was a decision to make.

“We can go back the way we came up," he said, "or we can follow this ridge to the other side of that mountain.” I followed his arm as he pointed. The ridge was long and narrow and the mountain looked far away. But we were all still a bit "high" from making the first climb, so we opted for the more adventurous route.

The strip of dirt we advanced across was just wide enough for the animals to plant their feet. Both sides fell away steeply. We were half way across when I felt my horse kicking out at the horse-flies that had appeared out of no-where. Our guide glanced back and warned us that if we felt our horses begin to slide off the narrow path, we should "get off fast. There's nothing to stop them if they start to go and you'll find yourself under 1000 pounds of horseflesh before you know it." Right, I thought. And why did I say yes to this, again? But there was no turning back now.

I was relieved, again, when we stepped off the ridge and began making our way around the second mountain. Then the trail disappeared and everywhere we turned deadfall blocked our way. After more than an hour trying to find a tail that would take us down we headed back up and around the mountain, then down the other side, "bushwhacking" through a dense growth of pine and spruce until we reached the river valley.

But another obstacle became obvious. The river before us was in full flood and the place where our guide had thought we could cross was too swampy for the horses to tromp through. So we headed upriver, looking for another spot to ford. Two hours later we decided to risk sloshing through the muskeg and into the river.

We all emerged drenched and shivering on the other side, but glad to be at last on open ground where we could make some time getting back to the campsite. We had been gone for almost twelve hours and we knew our friends and family would be worried. When we finally climbed out of the saddles we were tired and hungry, not to mention sore, but exhilarated. We had stories to tell and memories to cherish about the journey.

As I face those blank pages, chapters to be edited and articles to be fleshed out, I remember that trek on horseback and I keep going. I think of all the famous books that were rejected time and again but eventually became best sellers. I think of friends who keep sending out their work and learning their craft even though the rejection slips pile up. And I remember that when you're half way across a high ridge or fast flowing river, there's no turning back. I know it won't be easy - there will be obstacles and barriers that seem insurmountable, but there will also be memories to cherish about the journey and an exhilarating view when I reach the top.

"and let us run with perseverance the race marked out for us" Hebrews 12:1b.


****
Marcia Laycock is the winner of the Best New Canadian Christian Author Award for her novel One Smooth Stone. The sequel, A Tumbled Stone, has just been released. To find our more about Marcia's writing go to her website