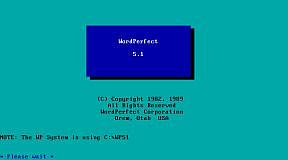 Acquaintances periodically ask, "How can you write when you can't see well?" This question is easily answered, though it does take a bit of explaining.

I use a screen reader, a program that converts the text on the computer monitor, as well as the keystrokes the user types, into synthetic speech. Thirty years ago, various developers made voice synthesizer hardware that either plugged into a serial port on the computer or fitted into one of its expansion slots. Modern screen reader programs use the computer's sound card and speakers to inform the user of what is happening on the screen.

I was introduced to the world of synthetic speech and screen readers in January of 1993. The Canadian National Institute for the Blind (CNIB), paid for three-quarters of the expensive hardware/software package, allowing me to use a computer for writing my articles and music reviews.

WordPerfect 5.1, difficult though it was to learn, opened the way to my future writing career. With it, I could write, edit, and overcome my chronic spelling problem. This MS DOS program gave me the additional ability to format my writing in an acceptable way for editors and readers alike.

I still use WordPerfect 5.1 today because it works reliably . With obsolete computers (which I choose to use), I wrote a variety of freelance articles, beginning in 1996, as well as two books. I have written a third one but it's only in manuscript form. By the grace of God, I hope to have it published this year.

Though I have done a fair amount of secular writing, my heart's desire is to glorify our heavenly Father through my craft. Having always had the desire to tell stories, I believe the Lord gave me the talent for communicating ideas. With his help, I hope to bring him glory through my upcoming How I Was Razed: A Journey from Cultism to Christianity memoir. I also post excerpts of my books and relevant stories about them on my blog. My books can also be purchased there.