A Time for War - Bruce Atchison 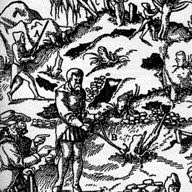 Certain people believe that there is no acceptable reason for waging war. I agree that war for conquest's sake is an evil that humanity has suffered from since the beginning. In an attempt to answer Edwin Starr's histrionic question regarding what war is good for, it's for God's appointed governments to administer justice.

Let's look at what the Apostle Paul wrote in Romans, chapter thirteen. From The Bible in Basic English, verse one says, "Let everyone put himself under the authority of the higher powers, because there is no power which is not of God, and all powers are ordered by God." This verse, and the next one, shows us that governmental authority has been given by God. There job, as verses three and four explain, is to reward good and punish evil. Part of that good is the protection of the people from foreign as well as domestic enemies.

As Christians, we are commanded to love God and our neighbour as ourselves. Vengeance is the Lord's and he will repay. Part of this repayment comes through the military and the justice system. Furthermore, God is the one who places kings on thrones and takes them out. We who live in democratic countries have the privilege of voting but it's the Lord who decides the fate of nations.

The Bible has many examples of when God commanded kings and leaders to wage war. Though Christ is the Prince of Peace, he will come in flaming fire and take vengeance on this rebellious world. As the author of Eccliasties wrote in chapter three, there is a time for war and a time for peace. The punishment of wrong-doing nations, such as Hitler's Germany, is a necessary part of God's justice.

America was attacked by foreign Islamic militants ten years ago. Was it wrong that this wicked act was partially punished by the execution of Osama Bin Laden? Should the Lord's justice be denied because some well-meaning, but naive, people want peace at any price?