Our InScriber Bruce Atcheson wrote, “I remember how amazed I was when I was making cards and my teacher told me how to spell Christmas. Until I was eight years old, I had no idea that the first five letters spelled the title of the King of Kings.”

Our theme question this month asks: When has Christ revealed something about Himself to you at Christmas?

Christ of "The Messiah" 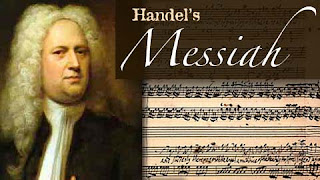 It was a magical dusk in early December when neighbours dropped by our house on the way to Calgary to hear The Messiah. I was only a child, but this, my first exposure to the performance, piqued my interest, and I determined someday to attend The Messiah.

As a young adult, I attended two live performance of The Messiah. I had recently experienced a renewal of my faith, and the message became so meaningful to me. The majesty of the music covered the grand sweep of Christ's purpose: beginning with God's promises as spoken by the prophets, His Nativity, Passion, Resurrection and Ascension. It ended with Christ's glorification in heaven.

As I write this blog, I’m listening to the beautiful music. I have attended the live performance several times since, and listen to each Christmas season, including on CBC Radio on Christmas morning.

But the story of its composition also has deep meaning for me.

The year was 1741. George Frederic Handel was deeply in debt and in poor health, having been prone to strokes and rheumatism, and nearly blind from cataracts. At fifty-six, he was nearly a forgotten composer, his music no longer played by the great orchestras of Europe.

He was deeply depressed and troubled, with little hope for his future and his music, and was ready to retire in disgrace.

But then he received a commission to compose a piece of music for a benefit concert for prisoners and hospital patients. A friend had an idea for a new oratorio, based on the Old and New Testament stories of Christ’s redemption.

The challenge inspired and revived Handel. Locking himself in his study , he feverishly wrote, sometimes even refusing food.

At one time, a servant came in to see the weeping Handel who explained, “I did think I did see all heaven before me, and the great God Himself.” He had just completed writing the “Hallelujah Chorus.”

Twenty-four days and 260 pages of manuscript later, The Messiah was finished. At the end of his manuscript, Handel wrote the letters "SDG"—Soli Deo Gloria—“To God alone the glory".

It became a huge success. When performed in London, King George II was so moved that he stood for the “Hallelujah Chorus.” And thus began a tradition we still follow today.

It has been the nearly 300 years since The Messiah’s first performance. Handel’s biographer, Sir Newman Flower, stated, “Considering the immensity of the work, and the short time involved, it will remain, perhaps forever, the greatest feat in the whole history of music composition.”

Handel continued to conduct this piece until his death in 1759, eighteen years after he composed it. He was buried with honour at Westminster Abbey.

The man who once felt life had no more to offer him had birthed a piece that has brought many—including me—closer to an understanding of God’s great plan of salvation through Christ.