We Are Works in Progress - Bruce Atchison 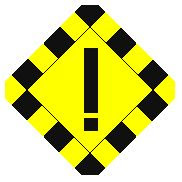 When I worked for Transport Canada's Airports Branch two decades ago, my friend Cliff put up a sign behind his desk. It read, "WORK IN PROGRESS. SORRY FOR THE INCONVENIENCE." I laughed aloud when I read it. This sign, innocuous on a construction site, became so hilarious when placed in a government office. I couldn't help but admire the clever sense of humour Cliff had.

Sometimes I believe I should have a T shirt with that sign printed on it. I don't mean to cause people "inconvenience" but the Lord is at work in my life, as well as in the lives of the rest of us.

Writing How I Was Razed has shown me that I'm far from perfect. Yet Christ is continually sanctifying me. As with any renovation project, it's a messy process.

Various teaching ministries have shown me that there are no instant cures when it comes to character flaws and personality problems. The Bible shows this in the life of the apostle Peter. Even he became caught up in the movement to impose the commandments of the law on the new Greek believers and sat apart from the gentiles at dinner. Paul corrected his notion and pointed out his hypocrisy in public.

Likewise, Paul and Barnabas parted company when they couldn't agree on taking John Mark with them. Since such men of God had their problems, why shouldn't we less-experienced Christians deal likewise with the ones we have?

I hope my upcoming memoir blesses its readers in some small way. It contains the lessons I learned about who God really is after being misled in a cultic church. My hope is that it will prevent others from making the same mistakes. I'll doubtless continue to blunder in future until either I die or Christ comes. The best thing for all of us to do is to repent of our sins and try again.

Email ThisBlogThis!Share to TwitterShare to FacebookShare to Pinterest
Labels: Bruce Atchison, How I Was Razed, humorous signs, memoir, sanctification