Making Our Calling Sure - Ramona Heikel

Lately I’ve noticed that my reading and devotions have been focusing on my “calling”, but thinking about that often makes me nervous.  It gives me performance anxiety, because I’ve been given an assignment, but what if I fail?  I believe God wants me to write, but I’m not sure if I have the ability to consistently glorify him, or be a good witness through my words.

Well, I need not wonder any more.  The fact is, I don’t have the ability.  That’s one of the freeing things about being 54 years old.  I’ve had most of my life to try as hard as I can to accomplish what I felt was important, and have become painfully aware of my limitations.

I not only fear that I will fail at my most important responsibilities, I fear making a fool of myself publicly by publishing what I write and having people chuckle to themselves about this newbie who should have revised a few more times, or roll their eyes at my silly ideas about life.

It occurred to me while I was listening to a sermon how much of a risk Noah and Moses took by obeying God’s call on their lives.  They could have made such fools of themselves if they’d misunderstood God.  And if the embarrassment wasn’t bad enough, they could have even gotten themselves thrown in jail or killed.  It took a lot of faith to do what they did.

Or, I should say, it took a lot of faith in God to obey what he told them to do.  That’s different from having faith in themselves. 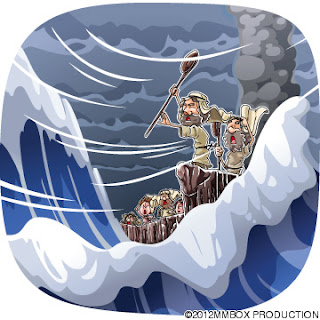 Lately, I am realizing that it is God’s responsibility to make something of my efforts.  He is the one that had the brilliant idea of working through humans to love and serve mankind, instead of taking the safe route of just doing it himself through supernatural methods (which would have taken a lot of pressure off of us!).  But I believe that this plan of his is perfect, because he is the one who thought of it.

Notice that in Acts 1:8 Jesus does NOT say, “After you ask for the Holy Spirit, you’ve got to try your hardest to demonstrate my power, and hopefully you won’t be too chicken to be my witnesses in your neighbourhood or overseas.”  (This is actually how I’ve been reading it for the past thirty years.)

No, he says, “You WILL RECEIVE power…and you WILL BE my witnesses.”  As in, “It’s going to be amazing what God’s power will do through you.  I can hardly wait!”

In Exodus 31, when God chose (called!) Bezalel to take responsibility for the designs of the Tent of Meeting and its furnishings, he “filled him with the Spirit of God, with ability and intelligence, knowledge and craftsmanship” so that he could make beautiful things.  God puts his Spirit in us, too, giving us writing ability, intelligence, knowledge and craftsmanship to make beautiful words.

I believe that this is what makes our calling sure: our awareness of God’s power and our willingness for him to use us for his own purposes.