Breaking the Cycle With Prayer By Marcia Lee Laycock 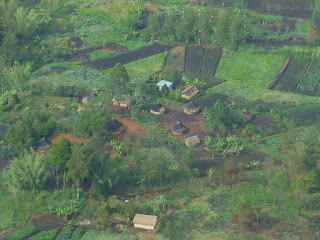 I often heard Iya before I saw him. He was usually singing on his way to work in our gardens in Ukarumpa, Papua New Guinea. But one morning when he arrived at our door, he was quiet and I could tell there was something wrong. He had come to tell me he couldn’t work that day. He had to go to the hospital, to take food to his wife’s “Papa” (her maternal uncle), who had been attacked. He’d been beaten, slashed with a machete, and left with twenty arrows in his back. Iya looked me in the eye (a rare thing in his culture), and asked me to pray for their village.

I knew what he meant. In P.N.G., there is a system called pay-back. It works well in a positive sense - if someone is in need, he asks for and receives help. When the one who has supplied that need finds himself in a similar situation, he can demand that his needs be met. It’s a system of caring for one another. But in the negative sense, pay-back creates a cycle of violence. Because Mifao’s Papa was attacked, it was expected his family and friends would retaliate by attacking the neighbouring village. Then, of course, that village would strike back. In the best scenario, several men, women and children would die. In the worst, the whole village would be wiped out.

Iya asked me to pray because the men in his village were making arrows.

My first instinct was to try and fix the problem - send in the police to keep them from killing one another, send someone to talk sense into them. But Iya said no. “Just pray.”

The next day, he told me Mifao’s Papa was still alive and he and the other Christian men in the village were having opportunities to talk to the people about loving one another, the way Jesus taught. When they brought Mifao’s uncle home, he was unable to walk, but asked them to put him down on the edge of the village. He crawled his way to the place where the men were making arrows and begged them not to fight.

They put their arrows away.

Those who had expected to be attacked were so amazed they came to ask why. God was glorified, because a handful of faithful people stood still before Him and asked for His help.

In Exodus 14:10-14, the Israelites had a chance to do the same. Pharaoh had finally let them go. They were camped at the Red Sea, when the Egyptians, suddenly enraged, surrounded them. With their backs to the sea, the Hebrews accused Moses of leading them to their deaths.

Moses replies – “So not be afraid. Stand still, and see the salvation of the Lord, which He will accomplish for you today… The Lord will fight for you; you need only to be still.”  (Exodus 14;13,14, NKJV).

But we must learn to let God be God. Let Him fight the battle, let Him work the miracle, let Him display His awesome love.

Only then will our cycles of pain and violence be broken.

To learn more about my writing/speaking/teaching ministry please visit my website.

Receive my newsletter, Home Words directly to your inbox and get a free pdf of one of my most popular short stories. Just click this link.