None of This is a Surprise ... by Jocelyn Faire

This is not a surprise ending. 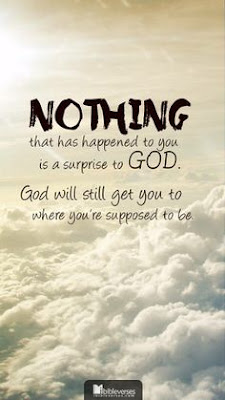 While contemplating the story behind the story idea, I had 90% of my blog written when something changed my focus. So here it is Saturday night and I have to toss out my original blog, because of an urgent request for prayer.
The story: My daughter and her family are faith-based workers in a North African country that is hostile to workers. They have gone into the country with a legitimate business plan, but share the light and love of Jesus whenever they can. At times the intensity of physical and spiritual needs bring them to the brink of exhaustion. Recently a new family arrived in this country to help in the work of sharing the Good News. In the past five weeks cultural and personal situations have arisen to overwhelm this couple ... and just two days ago a “routine” blood test showed extremely low platelet counts for their seven-year-old daughter. Suddenly the text message from my daughter read: **URGENT PRAYER REQUEST** Bella has been leukemia-free for about three years, and now it looked as though a relapse was imminent. Doctors on both sides of the ocean were consulted. First Bella was in need of an emergency blood transfusion to allow her to board a plane to fly back to Canada. The text said: Please pray that an ambulance will be found to transport blood across the city. Then a praise that it happened. Tickets were secured for the next day for the dad and his critically ill daughter to fly out, followed by his wife and the other three children two days later. My daughter was trying to find her own flight to travel up to be with this family; the airlines were in a slowdown. The text came in as: “Right now they are asking for two hours of family time before boarding. Traffic has been awful since the flooding ... again, asking for the Waymaker to show the way ... the darkness feels very heavy now. I myself am trying to secure a ticket to go up this afternoon and help her pack up the house, hold the other kids, wipe tears.” My daughter was unable to get a flight and needed to transport eight hours in a group taxi/small bus. On the bus, she sits beside a lady whose brother was killed that morning. "We've shared tears."
My own anxiety rose; I know my daughter has been running on exhaust fumes. And I prayed that she would have the “endless energy and boundless strength" Paul speaks of in Ephesians 1 in The Message. But where does one go, when the needs are so great, and the exhaustion sets in?
Then the picture of Bella arrives, this seven-year-old girl with her smiling brown eyes and her big grin-a second grader grin, where the new front teeth still appear a tad too big for the mouth, and tears form in my eyes and find their way down my cheeks as I look at her innocent face and feel the pain of a parent coping with the pain of a child.
Many times I have tried to encourage my daughter to take time for self-care, and there seems so little time for that. Galatians 6:9 keeps them pressing on: “Let us not grow weary in doing good especially to those of the faith”
And the faith of this family being tested, the picture of the seven year old daughter, keep me on my knees. And I am asking for you to support this family as they trust God for their daughter's ultimate health and healing.
And as I think of this, and some of my own deep struggles at times when life was difficult. And I text my daughter that “None of this is a surprise to God--there is some reassurance knowing that.” And my daughter writes back that: “It's true. (But) Always easier to accept when we're sitting one “relational step” away from the bleeding heart of any given tragedy/crisis." 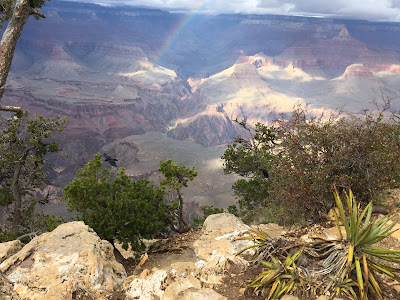 The ultimate story behind the story is that none of these struggles we go through come as a surprise to God.
Please join me in prayer support for this family and for my daughter and her family in their ministry.


Photo is from the Grand Canyon and if you look closely you will see a rainbow :)

Email ThisBlogThis!Share to TwitterShare to FacebookShare to Pinterest
Labels: Gal 6:9, God is not surprised, story behind the story