In reality, serendipity accounts for one percent of the blessings we receive in life, work and love. The other 99 percent is due to our efforts.

Jesus said, “You're tied down to the mundane; I'm in touch with what is beyond your horizons. You live in terms of what you see and touch. I'm living on other terms. I told you that you were missing God in all of this. You're at a dead end. If you won't believe I am who I say I am, you're at the dead end of sins.You're missing God in your lives.” John 8:23, 24 The Message

Serendipity the positive accidental occurrences that happen by “chance” from being in the right place at the right time. Some people call them miracles; I've called them God Moments and I'm guessing we have all had our share of them. I appreciated Michael Hyatt's reference to them being God's connecting points. I firmly believe that God does want to connect with us in our every day lives. The challenge for me is to be open to these points, to have my eyes in tune with chance happenings.To live on the serendipitous side of life can be a scary place.

In the fall of 2008, four years after the great tragedy that divided my life into before and after, I moved to Australia. People thought I was very brave; I knew it was probably more desperation than courage. Without knowing a soul in the down under part of the world, I accepted a nursing job in a private hospital in Perth, Western Australia. One of my most frequent prayers at the time was Lord, let my paths cross with the people you want me to meet. That is an ongoing prayer.

Several years ago, someone mocked my attributing some “miracle” to God, as he thought it was just a coincidence. To which I replied, well I know that when I pray about things, I do have more coincidences. 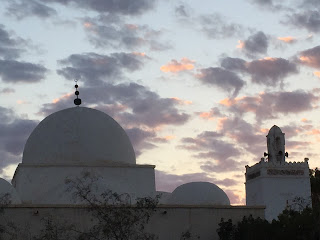 But, and it's a big But ... the randomness of tragedy is kind of the flip side of serendipity. The old song line says: If it weren't for bad luck I'd have no luck at all ... And on this note I am in North Africa on my posting date ....

After finishing their home assignment time, my daughter and her family returned early September. They had not even arrived in their home town. In the midst of their three day mini holiday/return to North Africa transition she called to ask my husband for signs of appendicitis ... she had been having unusual pains, moving to her low back as well. Harold asked her if she could stand up straight. So far she could. She feigned optimism.
A few hours later, she called again, she could not stand up straight ... she knew she had to go into an emergency to be seen. My daughter has delivered her youngest two children in Morocco and has helped many women in the N African hospitals, and has a healthy fear about being there. Why had this not happened four days earlier when she could have had surgery in a “safe” Canadian hospital?
She calls again to ask if they would have time to drive the six hours required to get to their home. She read the white blood count, and Harold (a physician) gives them the travel go ahead. Besides it was now 11pm in their zone, and he wondered if they would gather a team to do surgery in the middle of the night. And so, she is given pain medication, and my son-in-law with three jet lagged children in the back seat, one appendicitis pained wife in the front seat, heads out on the dark African roads at night, while somewhat anxious families back in Canada lift prayers that they will find open gas stations along the road and no wandering camels.

I do not sleep much that night ... but feel as though I must and can trust the Father to look after my daughter and her family.

Nothing comes as a surprise to God.

The surgery is successful. and the call from my daughter ... could I come for a short period to help with back to school week and surgery recovery. My mother heart knows immediately what my answer is. And truly I am fortunate to be able to find the time, find the flights ... and so as you read this, I know I will be experiencing God moments across the ocean.

Isn't life interesting. The song lines that came to mind as I write is from the old hymn: This is My Father's World. (a link follows) Don't we serve an amazing God?


photo from the north African country my grand children live in.

Email ThisBlogThis!Share to TwitterShare to FacebookShare to Pinterest
Labels: 24, John 8:23, who is serendipity? emergency surgery