My Electronic Doorway To The World Of Writing - Bruce Atchison 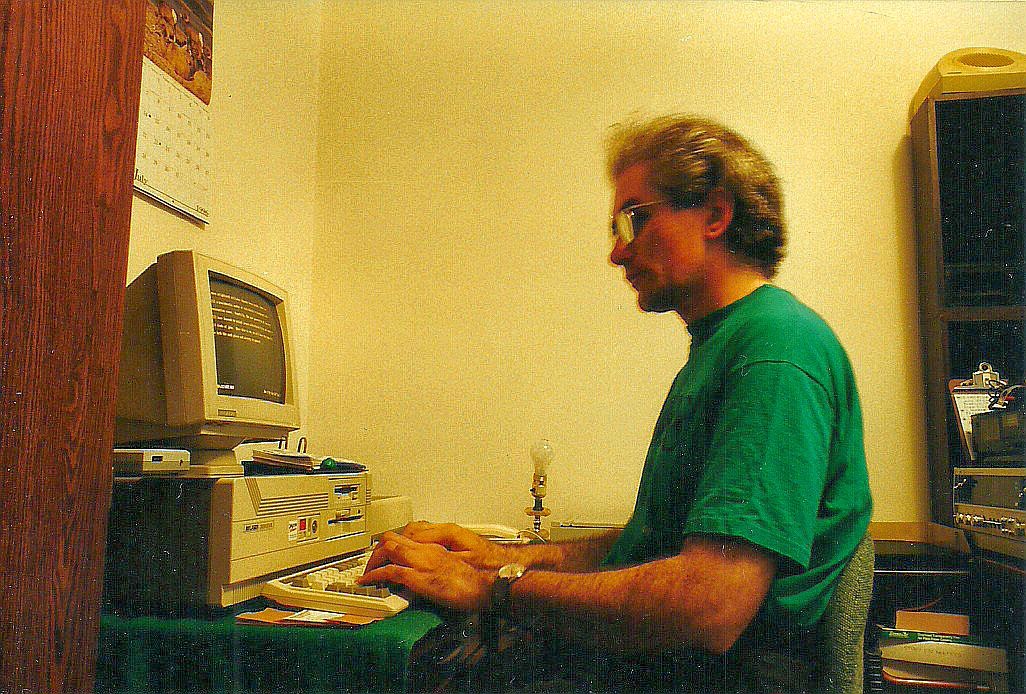 Though I've always loved making up stories and telling people about what I discovered, converting those ideas into print was a tedious process for me. My vision is so poor that I have to write with my nose almost touching the page. Typing was also labourious since I couldn't see what I had typed. Worse yet, my mind tends to race ahead of my fingers so that I often end up typing letters of the next word instead of those I had begun to write. My spelling was terrible too. English has so many illogical conventions regarding the way words are spelled  so it was no wonder I made mistakes.

I found the solution to these problems in 1993. Personal computers had been around for a decade but they couldn't read the screen text aloud to me without special, and expensive, equipment. Those green CRT monitors were very hard for me to read as well, even with a strong magnifying glass. The Canadian National Institute for the Blind (CNIB) awarded me a screen reader program and voice synthesizer module so that I could now hear what I typed and make corrections. Though I had to pay one quarter of the price of the equipment, it was well worth it. I still have the voice synthesizer, though the software won't work on PCs newer than the 486 series.

Now that I had a screen reader, I bought a second-hand IBM clone for $700.00 and WordPerfect 5.1 for DOS. What a world of writing those tools opened for me. I could type, edit, and format my work without straining to see the typewriter paper or the dim text on a monitor. The spell check function saved me from many embarrassing typos, though homophones still tripped me up. Additionally, I could listen to what I'd typed and hear grammatical mistakes.

The electronic door opened even wider for me in 1995. I took a business writing course from Athabasca University and learned to use bulletin board services. I also accessed the local public library and researched assignment topics with it.

By the end of that year, I joined the growing crowd of Internet users. News groups, web sites, and e-mail all helped me to research freelance writing opportunities. Additionally, I made many good friends online.

Though technology moved ahead, I felt reluctant to give up my 386SX computer and WordPerfect 5.1. When I bought a new computer in 2000, I still used my old faithful PC for writing articles. That lasted until the autumn of 2005 when it finally died on me. Having acquired second hand computers, I continued to use my old software on them. My three paperbacks were written with WordPerfect 5.1, as were most of my freelance articles.

My first two books are featured on the Bruce Atchison's books page. How I Was Razed: A Journey from Cultism to Christianity (My most recent memoir) is distributed through Amazon, Barnes & Noble, and Virtual Bookworm Publishers.