And the writer went forth to write .... some words fell on rocks, some on paper, some scissored, many words borrowed, few invented, but they were strung together in a new line, for she already knew the ancient declaration that there was—nothing new under the sun—only a twist in how to line up the words. 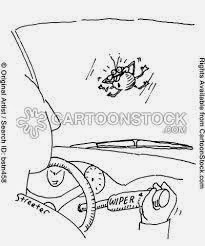 And this morning she was the bugged.

The two dollar girl had a four dollar complaint about the service in the McDonald's drive-through. It was so slow, her hair greyed faster than her order ... she tried to maintain a positive outlook as the five cars ahead stood still. Didn't they know she had places to go, things to do?

After speaking her order into the box: coffee, double cream and muffin, she turned the car off and opened her book ... moved ahead, turned off, moved ahead, paid the $2, foot on brake, half page read.

She practiced words/lines as to how she could gently and firmly let them know how slow the drive through was, and make kind suggestions for improvements—as opposed to just grumbling about how S-L-O-W they were. Should they be reminded of a former policy If it's not ready in 2/3 minutes it's free? As her car finally inched to the second window a paper bag(muffin) and paper cup(coffee) shot out as well as the young server's smile and words, “Nice short hair, it takes talent to do that.”

Complaints died on her tongue, a genuine thank-you said, and with grin on face she sped away, and marveled at the young woman's words, which had transformed her attitude.

And she removed her shoes at the garden, for it was on holy ground she stood, thankful that she was kept from speaking a feeble complaint ... thankful to be given a second chance to be a better person than the grumpster that wanted to burst forth.


It's only words and words are all I have to take your heart away. (Beegees song)


And I continue to be amazed, at the power of words, the way they have potential to connect or disconnect us. I examine my words and my purpose for them. When I take the time to write, I intend my words for encouragement ... when they flip off my tongue, they are not always as well thought before released. Catch and release works for fishing, Release and (then try to) catch does not work well in conversation.

I used to dread the editing process, felt it was much more creative to be “creating” and writing new words and ideas down. In a recent course taken, I came to realize that editing is a very creative part of the process .... did I choose the best words? (Thesaurus-I love you) Can I do a little research to enhance the ideas? (Google I like you) How can I express thoughts in a clearer way, draw the reader in to spiritual ideas without being a three point preacher? With a new enthusiasm, I look forward to working on some of my many little bits, to spit and polish them for greater value.

Ah, yes the June bugs are out in full force, mosquitos and wasps buzzing, but it's kind of like editing, learn to figure out what works and have fun in the process! Summer is still glorious, and I have a fender full of bugs to tidy up!