Can I Capture All the Balloons? - Janis Cox 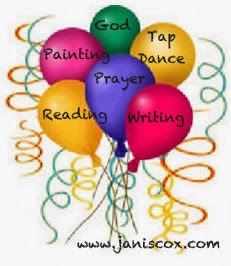 A friend once told me that she could see me with thousands of coloured balloons around my head and how in awe I wanted each one of them.

I am so thankful that I have learned to start each day in quiet refection, study and prayer. As I talk to Jesus and listen, I learn that it doesn’t matter what I do or try He will be with me. What a freeing thought.

It’s been twelve years since my life changed drastically with my new found faith. Having grown up knowing God, I had never turned my back on Him. But I had put Him aside and used the theory “use only when necessary”. And I had never really understood Who Jesus and the Holy Spirit were.

After much questioning, and wrangling with God Jesus revealed Himself to me.

The world came on fire. There was new meaning in my life. And then I wanted to try everything.

Writing was one of those balloons. God led me to start writing in a journal – all my thoughts, questions and answers from Him. Then a writers’ conference appeared – close by. And soon I started writing on a regular basis.

Last year I published my first book – a children’s book called Tadeo Turtle. It was totally inspired by God.

Another balloon was art. I began to paint in watercolour. I took courses, I practiced, and God inspired me.

Another balloon was prayer. Prayer became more and more important until I finally heard God say to start a blog called Under the Cover of Prayer.

So I’m having a great time. Some days I think I won’t get anything or everything accomplished.

But if I give God His time, He increases mine. (Tweet this)

How about you? What are you doing? Are you enjoying every minute of this life? Do you give God some of that time?

Janis, a former school teacher and small business owner, found a new passion in writing in her retirement. A writer since 2003, Janis co-ordinates a group blog called Under the Cover of Prayer. She is also a contributor to a group blog called Family and Faith Matters.
Janis is the author of the award winning children’s book, Tadeo Turtle, published by Word Alive Press. She is the author and watercolour illustrator. For more information visit Janis on her website He Cares for You. She is a member of The Word Guild and Inscribe Writers Fellowship.