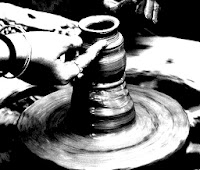 Fiction writing is God’s idea. The Bible’s full of it. From the stories of Nathan’s ewe lamb; Jeremiah’s marred pottery; to Isaiah’s vineyard; the Old Testament spins many tales of humanity’s broken sinfulness and God’s restoration.


Jesus’ many parables simply followed a long tradition explaining the truths of the kingdom. “The Kingdom of Heaven is like . . .” was His signature beginning of stories that told of God’s love and redemption, or of judgment to come for the unrepentant.

Christians throughout the centuries—whether writing for believers or unbelievers—when driven by the Holy Spirit, have attempted at some level to express the nature of God, and the godly values derived from Him; and much of that was written through fiction.

C. S. Lewis claimed: “Any amount of theology can be smuggled into people’s minds under cover of romance without their knowing it.” His fantasy yarns in Narnia, and his humorous banter in Screwtape Letters point to the truth about God just as much as the logic of Mere Christianity.

So writers, who are Christian, have imaginations inspired and fired by the Holy Spirit as they write their modern parables. From romance to high adventure, their signature “Once upon a time . . .” (rarely used but always understood), points to sublime truths that raise the human condition.

But are these pictures of God’s character, often concealed in figurative language, understood by the reader? That question raises another question; why use parables? Contrary to popular perception, parables conceal, as much as reveal, the truth they proclaim.

Isaiah was the first to record God’s warning that a calloused people would, “be ever hearing, but never understanding; be ever seeing, but never perceiving” (Isaiah 6:9). When the disciples asked Jesus why He used parables, He quoted that passage from Isaiah (Matthew 13:14).

Previously He’d said: “The knowledge of the secrets of the Kingdom of Heaven has been given to you, but not to them” (Matthew 13:11), explaining that the one who has will receive abundantly, and those with nothing will lose even that.

His words, like a riddle, remind us the same Holy Spirit that inspires the writer, also illumines the reader. An open heart will prompt the Spirit to give more understanding; a closed heart will lose even the opportunity.

This life may never reveal those drawn to Christ through our writing, fact or fiction. Be assured, He will not inspire us unless someone awaits our message.