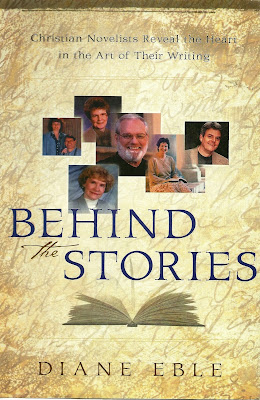 Behind the Stories: Christian Novelists Reveal the Heart in the Art of Their Writing

Diane Eble uses short biographies to review over forty successful fiction authors and their journey to success. She groups the authors in categories that illustrate various formative events that shaped their writing: “Say Yes to God,” “Uniquely Gifted,” “Everybody Needs Somebody,” and so on.

Several others recounted a crisis of faith, when a superficial faith resulted in writing that compromised the Christian faith. Terri Blackstock wrote many romance novels that required explicit sex in order to sell. She told herself they were just harmless entertainment; she had the fine art of self-deception mastered.

Francine Rivers eventually saw her writing itself as an idol, leading her to accept that her writing no longer mattered to her; all that mattered was following the Lord. That ended a period of drought. Janette Oke says; “I told God I would write this book, and if I had any talent I would give it all to Him. Then God showed me I had it backwards. He wanted everything right then.”

Other biographies discuss overcoming obstacles: dyslexia, violent childhood, fear of failure and sickness. It often provided inspiration for their writing. Others were unaware of their gift because it was too central to who they were; they were not aware of it. Teachers and mentors saw the gift and encouraged its development.

Many explored why they wrote fiction. Robin Jones Gunn quoted from a poem of Emily Dickinson’s: “Tell all the truth, but tell it slant.” Both Robin and Catherine Palmer quoted C. S. Lewis: “Any amount of theology can be smuggled into people’s minds under cover of romance without their knowing it.” The writers were in universal agreement that their purpose was to draw people to Christ.

There is no problem that we writers face, that is not common to man. Whatever we may go through, others’ experiences in this book will provide encouragement to persist in God’s call upon us.