A Little Guy Who Made A Big Impact - Bruce Atchison 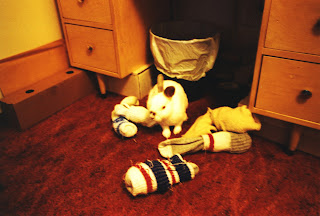 Of all the noble characters in Scripture, Gideon is my favourite. I can relate to him since He wasn't strong like Samson, brave like joshua, or highly educated like the Apostle Paul. As he admitted to the angel who appeared to him, "O Lord, how may I be the saviour of Israel? See, my family is the poorest in Manasseh, and I am the least in my father's house." I love the fact that once this unassuming man knew what he had to do, he went forth and liberated his nation from the Midianite invaders.

Since the biblical Gideon was a timid person who nevertheless caused his enemies to be defeated, I named one of my house rabbits in honour of him. He certainly was worthy of his name. He was a Himalayan bunny who behaved like a fur-clad Dennis the Menace.

Like that comic strip character, Gideon had the knack of getting into trouble. He once found his way past the boards that I placed around my bed and chewed up a leather suitcase, along with assorted cardboard boxes and papers. He snipped my phone line one morning, even though I wrapped it in aluminum foil and tucked it under the baseboards. To this day, I have blankets, sheets, and pillow cases that bear his dental autographs.

Even with all the mischief he caused, I loved that pint-sized rascal. I fondly remember the many pleasant evening hours we spent together as I lay on the floor and petted him. Whenever I sat down on the rug, he came bounding over for pets. He often loafed next to my desk for hours like a faithful dog as I wrote freelance articles.

Gideon also entertained me with his playful antics. During many mornings, he raced up and down the hallway in an attitude of pure enjoyment of being alive. I also let him shred cardboard boxes and phone books so he wouldn't ruin my furniture. He even learned how to hurl rolled up socks between his hind legs like a football quarterback. I loved watching him clearing them out from under the desk and pushing them with his forelegs as if he was digging a burrow.

I wrote a book about Gideon as well as the other loveable rogues that I adopted over an eight-year period. Through hilarious and poignant vignettes, When a Man Loves a Rabbit (Learning and Living With Bunnies) describes how I discovered the true nature of these misunderstood animals by treating them like house pets rather than furry amusements. For more information regarding this memoir, as well as Deliverance From Jericho (Six Years in a Blind School), please visit my InScribe page.