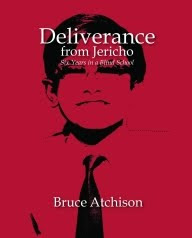 Attending church has always been a problem for millions of blind and visually-impaired folks. For us, the hymn books and Bibles are unreadable, the overhead projector is hard to see or invisable, and the bulletins may as well be blank sheets of paper.

In most congregations, this is an unintentional oversight. The Lutheran Blind Mission does produce braille and large print worship materials but the majority of churches are unprepared for blind congregants. Worse yet, some denominations either don't explain why God doesn't perform miracles today or they blame the poor disabled soul for not receiving healing after being prayed for by the elders. I've experienced both forms of cruelty.

In Deliverance From Jericho (Six Years in a Blind School), I wrote of the first sort when I was forced to attend an Anglican church. Though I now know the truth, here's how the lack of teaching on verses such as John 9:3 left my blind friends and me to conclude in May of 1968 that God didn't care about us.

Church began to seem futile and irrelevant to me around that time. I dreaded going and wished we could stay at the dorm on Sunday. All those stories concerning Christ and the Old Testament characters appeared to be as germane as fairy tails. After one service, we were sitting on our beds in the dorm when Peter said, "I wonder why God doesn't heal people anymore." "Yeah, I wonder about that too," Michael added. "I wish God would heal us. We could get out of this horrible place and be free," I added. "God sure doesn't care about us," Peter noted. "If he did, he'd heal us." Our theological discussion left us in deep thought. "I hate God," I concluded after a long pause. "He doesn't want to help us." In the stunned silence which followed my remark, I began to doubt that the Lord was even listening.

In my next memoir, entitled How I Was Razed, I describe how nobody from the Vacation Bible School taught me the basics of Christianity when I gave my life to Jesus in 1969. As a result, I was lead into a cult congregation and believed their hurtful lies for more than 15 years. After rejecting God for nearly a decade, I realized it wasn't his fault that phony Christians mislead me to think I could be healed by willing my sight to get better.

If all goes well, this book should be in print by the end of the year. Meanwhile, information about my previous titles is at the InScribe Writers Group page.