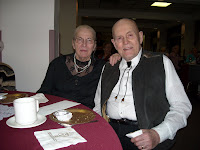 Marriage is the closest example of Christ’s relationship with His church. “Therefore shall a man leave his father and mother and cleave to his wife" (Genesis 2:24 KJV)

With Mother’s Day not long past and Father’s Day just ahead, I’ve been thinking about the meaning of these occasions. My thoughts traveled back a few years to the time when Eilif had just been discharged from the hospital. I was surprised a few days later that he was going to the library for a video. He hadn’t been steady on his feet since his illness so I offered to walk with him.

“Then I’ll go with you to help you pedal,” I said, thinking he’d be glad for my offer. Even when he made the blank statement that he didn’t need me, I insisted. Then I remembered I had enough change on hand to cover his late fees, making the trip to the bank unnecessary. We walked to the library together. Only later did I realize that he’d tried to shake me off so he could buy a Mother’s Day present without my knowledge.

On Sunday afternoon our daughter Barbara and her family arrived with the most practical of gifts – a garbage can. For weeks Barbara had insisted that I needed to replace the old yellow can that had inhaled our garbage for years. I didn’t see it as a problem, so she decided to do something about it.

After I’d unpacked the can, she set it up in the kitchen and and her son, Kris, took out the old can with the trash in it. After they left, I said to Eilif, “I thought of putting the old can in the storage room to hold the recycle bag. I think I’ll still go get it.”

“That’s ridiculous!” was Eilif’s response. “Barb would be embarrassed when she sees again.” At this point our buzzer sounded for more company and I forgot about the can until we were getting ready for bed.

Although Eilif had not changed his mind about the absurdity of my idea, he offered to get it for me. He put his shoes back on and trudged out to the trash bin. As I thought of him in his weakened state, having to dig through layers of gift wrappings and dinner scraps that would have accumulated by this time, I began to feel foolish about even having mentioned that old can.

When he came through the door with it, I thought how silly I’d really been. That Barb would see the can sooner or later was inevitable. What struck me most was the fact that despite Eilif’s health problems, he went out of his way to accommodate my wishes.

“You did this because you thought this was important to me even though you thought the idea foolish,” I said. “I appreciate that more than the getting the can back.”

He smiled. “Then I am thankful I was able to give you a Mother’s Day present after all.”