One Day at a Time Sweet Jesus! 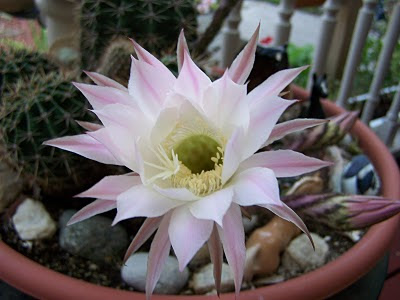 [PHOTO: Dad's Cactus in bloom for one day!]


The other day I was looking at some photographs and I came across this cactus flower image I captured a while ago.
My Dad had three cacti arrangements that he faithfully carried in and out of the house as the seasons changed. The lush green and sparkling spikes had grown tenfold over the years and were delightful to look at but I always thought them a bit of a menace should a child or pet come into contact.
I recall Mom getting fed up with the big pots on the verandah tables and sometimes she would urge Dad to get rid of them. He never did.

After about ten or so years of faithful nurturing and occasional watering, something incredible happened. On one of the chubby cactus plants strange appendages began to sprout. Suddenly flowers appeared; the most gorgeous pink and white blossoms. Their magnificent appearance was fleeting, however, for the blossoms lasted a mere day. But that sudden beauty was thrilling and exhilarating and most rewarding for my dad who had patiently cared for his little portable cactus gardens.

I thought about the cactus flower again this morning and remembered Dad's patience. He did not realize that there would be such a reward one day. He did not know that for a moment in time he would actually see the fruits of his labour. When the flowers did appear he rejoiced and called us all in to see and witness this seeming miracle.

So it is with the faith and toil of a Christian. Why am I doing this? Does prayer matter? Did my life make a difference to anyone?

Some days may seem like thorny spikes pressing at me as I endeavour to live for Christ. But I cling to the hope and the promises of God as He assures me that the blossoms will appear, the reward is real and the angels will rejoice!

Now back to nurturing and the occasional watering - one day at a time!


Let us not become weary in doing good, for at the proper time we will reap a harvest if we do not give up. Galatians 6:9