The British Empire was impressive during the reign of Queen Victoria. Its remnants are a reminder of how tentative our hold is on what ambition and self-interest accumulates.

Two young people I know are getting married this coming weekend. There are so many things I desire for them but the greatest is a foundation that goes beyond even the strongest bond of love.

The church, despite every effort to make it attractive to a lost world, limps along, often so "relevant" that its adherents are starving to death, apathetic and weak.

We work so hard to build something good: an empire, a marriage, a church, only to discover the truth of Psalm 127:1 (NIV): "Unless the LORD builds the house, its builders labor in vain. Unless the LORD watches over the city, the watchmen stand guard in vain." 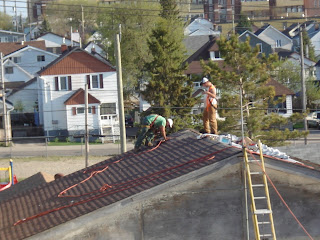 From my balcony, I watched a couple of men working on a roof. It seemed like dangerous business to me. One slip and the next stop might a hospital and a long struggle with Workmen's Compensation. To build well isn't easy. The commitment to excellence requires time, patience, and sacrifice. But most of all it needs the LORD. From empires to families to churches, unless He heads up the building crew, it just "ain't gonna happen."