A Teacher in the Great Depression - Lyn Kublick 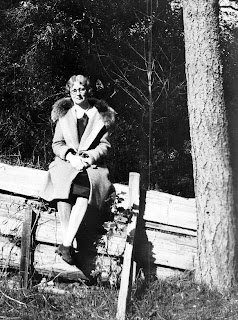 Mom
May, the month of Mother's Day, is nearly at an end. My passion is walking through history while comparing it to life today. My mom and I both taught school. So much is the same and yet so much differs.

Georgiana Reager grew up in a family of six girls. She lived in small town California and was an excellent student. For that reason she was the one chosen to attend classes at the University of California in Berkeley.

Upon graduation, in 1925, she went to teach in a small town in Northern California where she met my father, Arthur Noble. Georgiana and Arthur began to date and plan for the future, but . . . .

The Great Depression struck in 1929, altering their plans and affecting their lives -- and mine. By that time her sisters were married, and she had 8 small neices and nephews. Her parents had sold their ranch and invested in Bank of Amreica stock. That stock disappeared in the crash leaving her parents with very little savings. Her brothers-in-law struggled to find work, along with many others, and life was grim for the Reager family.

One bright spot was Georgiana's teaching position. She was "well paid" for those times, and her salary was used to cover the greatest needs. Unfortunately, due to the many "family men" looking for jobs in education, married women could not be hired to teach.

If Georgiana and Arthur followed their hearts, her income would cease to exist, and she couldn't see her way clear to abandon her family. They waited through a long engagement and finally married in 1935. This says a lot about my mother's sense of responsibility, and her devotion to her family. It says even more of my father's love and understanding of his future wife.

I was born a number of years later -- an after thought in my generation, and destined to be an only child. My role at family reunions, attended by my first cousins and their little ones, was that of the built in baby sitter. This was in no way a hardship as I loved my little cousins and time spent entertaining them may have led to my own career in education.

Things have changed. We are said to be going through a depression, but it has had little effect on schools and teachers. There are some spending cuts, but no stringent rules about who can be hired to teach, based on marital status.

God's hand was on my mom and dad. He carried them through a difficult time. He continues to be faithful to us when things don't go as we wish. If we remember to turn to Him, we can rest in His perfect plan for each of our lives.