My father emigrated from Finland in searched of work.  He was on his way to Thunder Bay, Ontario (originally known as Port Arthur and Fort William) because he heard that there was employment and many Finns had already settled there.  But on his way, he stopped in Sudbury and discovered that the mines were hiring.  He landed a job and called for the family to join him.  My mother travelled by ship to Canada with one suitcase and three children to tow; a thirteen-year old girl, a boy of seven, and another boy of five.  It was March 1952.  I like to joke saying that my family arrived by boat in 1952 and I arrived that year as well but not by boat.

If I had been born in Finland, I’d be proud to say I was Finnish.  Finland is a wonderful nation as well; a small but strong and determined nation.  Many Finnish inventions have improved life for others.  A few of their inventions are; Nokia mobile telephones; sauna; heart rate monitors used by athletes, IRC (Internet Relay Chat – chat rooms); and the Finns are world leaders in research and development of water use and purification. 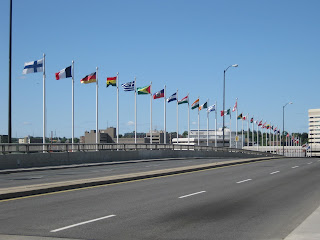 But I am Canadian, living in Sudbury Ontario; a city comprised of many different nationalities.  We have many talents and inventions that we’ve contributed to the world. We have a bridge in the city that is lined by flags which represent the various ethnic groups residing within the City of Greater Sudbury (Ontario).  The bridge is named The Bridge of Nations.

Oh, Canada!  A great place to live and work!  Thank you, Lord!