I must admit, I am not really into sports. I was the kid who got chosen last for most team sports. It was a painful experience and a practice that I vowed I would NEVER do as a teacher. But the damage inflicted on my childhood psyche is not the object of this post! 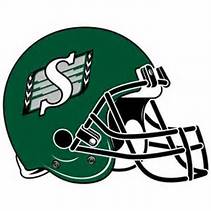 When I say I'm not into sports, perhaps I need to rephrase that. I actually enjoy watching lots of sports. My father was a huge sports fan so I grew up with Hockey Night in Canada, Blue Jays baseball, and of course, the Saskatchewan Roughriders. Yup, my blood really does run green during football season - no matter what the win/loss column says.

Which is a nice segue into my next point, actually. Currently, my Riders pretty much suck. But Rider fans like me never give up. We keep watching and cheering (and maybe even wear a watermelon hat on occasion for good luck...) Why do we inflict this kind of pain on ourselves?

FOR THE LOVE OF THE GAME.

Athletes have to train hard. They have to put in the time. They have to persevere through the pain of injuries. (Ask my niece who continued with her competitive figure skating with a broken toe!) This takes determination. As well, athletes often rely on a host of trainers and psychologists and coaches. Even those in individual sports have a 'team' behind them. I could make dozens of comparisons between being an athlete and the writing life. As we've read already this month, Paul even uses sports analogies.

But all of that training, time, and tenacity doesn't amount to much if you don't love the game!


The town of Tumbler Ridge where I live hosts an event each summer called 'The Emperor's Challenge'. (Check out the cool video/website here.) It's a half-marathon up the side of a mountain and about a 1000 people come from all over the place to put themselves through this gruelling race. As a non-sportsy type, I don't get it, but I have a friend who loves this sort of thing. She trains hard-core and travels around the province all summer going to iron-woman competitions and running marathons. Why? It's a common thread among the 'running' set: She LOVES to run.

Some of you may know that I recently lost all of my data, including six new works in progress plus hundreds of other important files. It was a writers worst nightmare come true. After the initial shock (and about five minutes when I thought I might just give up altogether), I realized that just isn't an option for me. Why?

For the love of this game we call writing.

Tracy Krauss continues to pump finger weights to keep her fingers strong for clacking away at the keyboard. She lives with her husband of 34 years in Tumbler Ridge, BC.  tracykrauss.com

And she will never cheer for the BC Lions...