She gave birth to her firstborn, a son. She wrapped him in cloths and placed him in a manger, because there was no room for them in the inn. Luke 2:7. 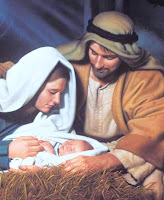 People of every age make life’s biggest mistake by imagining God in every guise but His reality. Really, the stable is ridiculous; the Ruler of the entire universe would come in power to a palace and take up His rightful place as King of the earth. In fact, God’s people of that time fully expected their Messiah to come as a liberating hero and kick the occupying Romans out.

Both convenience and fear dictate our caricatures of God. Our Father-God should want everyone to have a good time; He must be a grandfatherly figure, who pats us all on the head. A God of love has no choice but to provide a haven where He overlooks our sin, so we’ll all enjoy a heaven of our own making—some heaven!

We may imagine Him as an erratic father who needs to be appeased at every turn; perhaps a stern and disinterested judge who brings adversity to punish us for our sins. He probably waits to pounce on every deviance from his will like a tyrannical dictator.

Alternatively, He simply wound up the universe like a clock, and, with no further interest in it, left us to our own devices. Just as likely, He doesn’t even exist, so we’re accountable to no-one!

But, the stable, a significant symbol of Christianity, destroys all our foolish imaginings. Seeing God in a cattle trough can only attest to one overriding characteristic: humility. When God gave Moses the Law in Exodus 34:6–7, he described Himself by characteristics we possess and recognize: compassion, graciousness, patience, love, faithfulness, and forgiveness—all components of humility; above all, expressing the values by which He would administer the law.

However, that doesn’t ignore His omnipotence. In the same passage He also described Himself as just. When His humble approach to humankind reaps no response, He will take the only course left, that of judgment. He was constrained to the manger by His love, not weakness. Don’t let us mistake “gentle Jesus, meek and mild” for a weak, ineffectual Ruler who will never bring justice to the world.

So this Christmas season, we rejoice that God reached out to us in a way we can comprehend—by becoming like us, feeling our pain, showing us how to live, dying to redeem us back to Himself, and finally rising from the grave to confirm his authority, power and truth. But, the fulfilment of the promise of His first coming is the guarantee of His return with power and justice.