My father's birthday was this month. I remember him with love. This story I wrote several years ago in his memory.

"We all knew it was only a matter of time before night fell. The signs were unmistakable.

'His arteries are like lead pipes,' said the doctor. I had never seen the inside of a well-used lead pipe, so I could only imagine.

Everyone slows down with age, but the first time I noticed life was taking an irrevocable twist was when I caught him staring at me as though I were a perfect stranger.

Who are you, and what are you doing in my living room? He didn’t say it, but I could read it in his eyes, distant and puzzled. 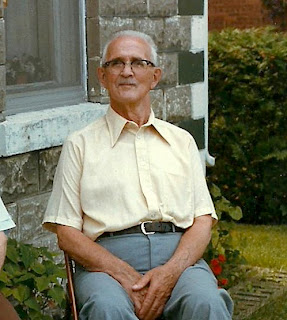 In the beginning, the changes were subtle, causing concern but not panic. Later those changes would become more marked, sometimes frightening. Moments of madness when hours twisted. Morning became night. Night turned into afternoon. Anger and aggression kindled in his eyes. Some other person had taken possession of a man once irritatingly mild and meek. He would not have recognized himself, known himself. He would not have liked what he saw. I was glad he didn’t know.

In the early days and later, in those moments when dad returned to visit himself, he appreciated the humour of the situation. One afternoon he came home from his walk with his face all battered and bruised.

'What happened to you?' is a silly question to ask a man who doesn’t remember those seconds when the mind turns off. We asked anyway, to which he replied with the classic: 'You should see the other guy!' He didn’t always collapse from those mini-strokes. Usually he’d simply stand there, a blank look on his face as though he were far, far, away. Perhaps he was.

One Sunday, still dressed in his Sunday best, dad left the dinner table to go to the bathroom. He hadn’t been there long when we heard a loud thump and crash. I jumped up and ran. Dad was sitting sideways, rear in the bathtub, head resting against the wall, and feet waving in the air. He was laughing uproariously. He’d missed every sharp and potentially damaging object in our small bathroom—certainly a miracle in anyone’s book.

Public Health sent nurses in regularly to check on seniors still living alone in their own homes. I was visiting on one such occasion when the nurse came in to check blood pressures and to cut dad’s toenails. It was summer. The light was much better in the porch so they went out there. I followed. Something clicked in dad’s mind as the nurse worked on those yellowed, thickened, nails. He turned to me and smiled that impish smile that was a characteristic precursor to some quip.

Yes you are, dad, I thought.

When he was growing up, everyone had to be tough. He’d had to leave school before finishing the eighth grade to help out on the family farm. He’d worked in an asbestos mine, fixed cars, and looked after his now growing family on the meager income of a unlicensed mechanic. There were no extras. We wore hand-me-downs, and didn’t have a car until dad managed to pick a cheap one up at a police auction—one he drove for the next twenty years. He loved us in his own quiet way, provided for us, disciplined us when we needed it, and was a faithful husband. For a man who had worked all his life, retirement was punishment. He soon returned to work, pumping gas in freezing cold weather until he was seventy-five years old.

However, it was back to his roots that dad returned during his last years. When it was no longer possible to look after him at home, he went to live in a nursing home. By then the lights of his mind were very dim, like the kerosene lamps of his childhood.

He looked up with that same quirky smile that time never seemed to fade.

'Pa made it for me,' he said, fondness and pride lifting his voice. He was back on the homestead, surrounded by brothers and sister, mom and dad, rather than doctors, nurses, and strangers. He smelled freshly cut hay, not the odor of disinfectant and stale age. His mind was free even though it was confined to another time and another place.

It was twilight, the grayness before the night, and only two moments before eternal dawn."