I had a friend who refused to go to church on Mother’s Day. Her mother was dead. She had never been a mom and somehow she couldn’t bring herself to “rejoice with those who rejoice” (Romans 12:15).

That experience gives me pause for thought when Father’s Day rolls around. Many people have had “daddy damage” and Father’s Day must be clouded with pain and bitterness for those who haven’t been able to deal with those issues.

As much as we’d like people to focus on the qualities of God the Father rather than on Daddy the Dastardly, it’s often hard to take the leap from the physical to the spiritual. When you need a hug from dad you need, well, a hug from dad. 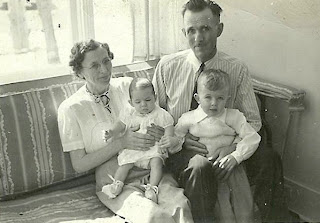 My father was not abusive. He was simply not demonstrative. I don’t remember a lot of hugs or words of affirmation from him. But I am thankful for other signs that remind me of who he was behind that wall of detachment.

He worked hard to provide for his family.

He only spanked as a last resort and never raised his voice except in defense of his family.

He made sure we got safely off the train when our sleeper car was set on fire by a careless smoker.

He played Crokinole with me.

He never complained about mom’s cooking (He never complimented it either—much to mom’s disgust!) but he ate everything on his plate.

He went to church every Sunday and people say he had the best handshake of any of the ushers.

He cried when I graduated from Seminary, but not in front of me!

No “biggies” but a lot of little things that add up to a good dad for whom I have always been grateful to God, especially since there once existed a possibility that he wouldn’t be my dad at all. Before mom began to get serious about dad, she dated his brother. I’m sure Uncle Eddie’s daughters thought he was wonderful—but I’m glad I wasn’t one of them. If I had been, this story would have been a whole lot different.

Sometimes God my Father is like Dad my father. He goes quietly about the business of looking after me without my being necessarily aware that He’s there. It’s not up to Him to make me aware of that presence; it’s up to me to count on Him being present and to remember that His thoughts about me are a numberless as the sands of a thousand beaches (Psalm 139:18).

I’m grateful for both of them.