(I just completed a week-long writing workshop in Craftsbury, Vermont, sponsored by Orion magazine. I was very excited to have been accepted…but now it’s over.)

It's possible to describe this moment as a howl, a gut-yell that wakes a day-owl—and awakens me to a road ahead where my air is de-reified. So as I coast away from Craftsbury Common, I howl a farewell—reality being wild and religious. 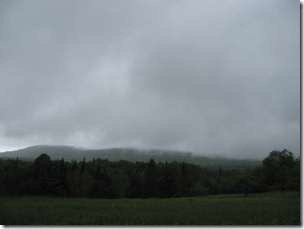 I arrived in the mist, have left in rain. All the days in between, as rapturous as Wordsworth and semi-wild as Frost. For of  course Vermont is rapturous, and just wild enough to attract the poets; but not so wild as to make us insecure.  A rhapsodic footing that sets us up to write creeds—canons of Edenic return.

And so I write: These old trees, maple and ash and hemlock, have their root-hands deep in the moraine. They keep lifting it up in places, religiously, like charismatic worship in an outdoor church. And so on.

But all the broad leaves push up against my ribs like rain swollen wood against a door jam, deciduously pile up over my head like a reasoned sermon without a revelation.
Vermont has rolled it 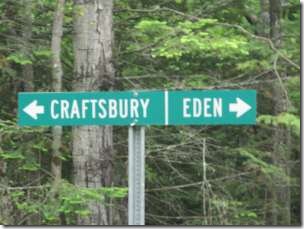 self out under my clothes, but I couldn't go naked here. I've been appeared to pastorally but I haven't been penetrated. That's the way with places. To know this place, I'd have to have been squeezed though the birth canal of a yellow beech, dropped into a pond, grown feet and roamed the understory. So it's funny that I think I know this space.

Prairie is what breaks my heart and so I avoid it, but know it's my place. (Is it normal to know you belong somewhere else but not want to be there?) I was birthed in the prairie: I was flooded out of a gopher hole by a farmer with a 45 gallon barrel, a hose, and a .22. I squirted out, just beyond range, raced along a Euclidean barbwire fence until I reached the next province, tunnelled under the border, as if prairie borders matter, and scrambled to where mountains are still unseen but heard of. It's called Parkland, which is a bothersome name, bespeaking nature's equipoise and hygiene.
Growing up on the prairie my eyes got used to seeing distance. Today I live in the inner-city and when I raise the Venetians I see a wall of cinder-block across the alley. My gaze has now gotten used to the scrub poplar, long grass and dry-air horizon inside me. My inscape—nothing grand, nothing like Hopkins—just an inner-space that's windy and open as a falling down barn. 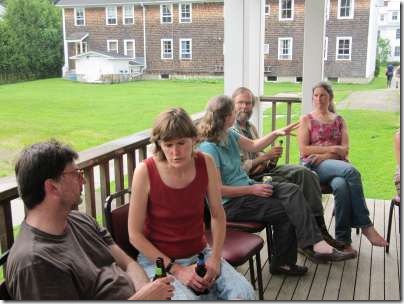 But perhaps if you burrow down in any place, like a ground squirrel, further, like the taproot of a middle-aged hemlock, you meet souls like yourself. And if you're brave and keep going like Jules Verne and go to the core, what drama, what molten affinity. Maybe that's where my howl comes from; that depth, that stark beauty, where everything is out of place, beyond place, and undiscoverable. Unknowable as another heart.
I'm on the road to Hardwick. The lake I'm thinking about, the one we could glimpse from the Maple Leaf Farm on our last 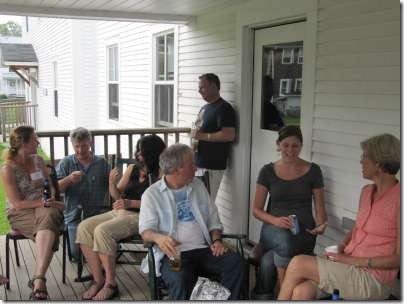 Friday has a name. But I'm not interested in knowing it. I know it's there high in the hills, out of sight, achingly clear and serene. One tear held in the nasolacrimal duct of Vermont, unshed.

I think of Wildbranch and all the writers I've met and have heard. So many beautiful attempts to name place, and each attempt, brilliantly achieved. But we know, don’t we? that in the eyes of the black-hot core of this earth, they all fail.

For me, in my attempt to use what’s given and tunnel into mystery, my great discovery is an ever-recurring one: As old as I am, I'm spit-into-the-wind naïve.

(Thank you Wildbranch and Orion magazine, for a sterling week!)