“What papers do you have to show us that we should let you back into Canada?”

I was so surprised at the question, I could only stare at the Customs and Immigration officer.
For twenty years I’d been traveling back and forth from Calgary to the States to visit family, and never once had anyone asked me that question. My United States passport had always allowed me to cross borders before. Now things were changing, she explained, and I should become a Canadian citizen.
In 1985 when I moved to Calgary, dual citizenship was not allowed by the U.S. Apparently, though, this was no longer the case. Never one to take someone else’s word for it, I wrote a letter to the U.S. Consulate in Calgary. He assured me that as long as I had no intention of disloyalty, I would retain my American citizenship if I became Canadian.
The scriptures mention spiritual citizens: all who trust in the payment for our sins by the innocent son of God have a heavenly citizenship. It is a good exercise for me to think about issues of nationality from both political and spiritual perspectives: 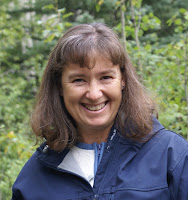 In January 2008, I became a Canadian citizen (and just got my passport a week ago!). So maybe I can say that I am not just a dual-citizen, but a triple-citizen!
Posted by Ramona Heikel
Happilywriting.com