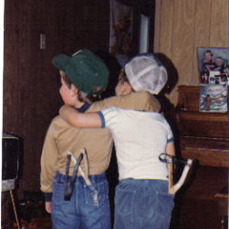 For several years my sister's family and ours would get together for the November 11th remembrance weekend. Of her two boys and my daughter and son, two are very close in age, and one each being older and younger. Our family would most often make the 10-plus hour drive: from our Alberta home to theirs, in north-eastern British Columbia. Invariably, it would be the coldest weekend of the winter: bitterly cold, with or without snow. And often, we'd have to navigate icy roads either coming or going.
Our school system would often add an extra day off to make the break a 4-day stretch. Considering the time spent traveling, that would usually leave only two full days together. The kids crammed every minute full of games, watching movies, eating, laughing, reading crazy comics. The day we arrival, the two cousins would be watching for our car to drive up: pouncing on each other, hugging hellos, not skipping a beat from the last time they saw each other - which was often weeks, even months earlier.
My sister and family lived in a trailer for a few years. I don't remember its square footage (not huge, not a double-width) but we all had comfy places to sleep - and it had a hallway that was perfect for playing hockey. A spot for a goalie on either end, leaving two forwards to make the plays. More pouncing, cheering, with occasional balls the goalie missed flying into the living room. So much fun, beet-red faces, shirts being stripped off regardless of the outdoor temperatures. Such great memories of hockey in the hall. No Zamboni was on site but there must have been repairs and maintenance necessary after the players shook hands and half of them left for home.
All that action called for copious amounts of good food. Big pots of hamburger soup, mashed potatoes and roasted chicken, grown and raised down the road at the in-laws. Nobody can bake buns like my sister and she'd always have a huge batch of homemade poppycock in a Tupperware tub tucked in the cupboard. To add to the mix, friends of my sister and husband would often drop by, which was sure to add a couple more kids to the melee.
The fun wasn't restricted only to the kids, but we four adults didn't need near as much action to enjoy each others company. Going out for coffee, the whole gang playing walleyball, me watching my sister knit and thinking I might try the same, taking drives to enjoy the vast views, watching videos. To be honest, I don't remember attending any remembrance day services; I guess we were often traveling and perhaps more accurately, those were the years when for whatever reason, at least where we were, attendance waned at those services. In our defense, I think it would be correct to say that since then, our activities on remembrance day have often been shared with honoring those who've fought and died for our country.
Our tradition of getting together also waned as the kids got older and life changed, as happens for all of us. The day came (and lasted for a few years) when my sister and I ended up living in the same community - and the pleasure was ours to get together whenever we wanted - with and without the kids.

Those four kids, all parents with their own children, are so scattered across the continent that the siblings rarely get together, and it's almost never for the cousins. That adds to the reason why memories of our remembrance day visits are especially fond and the telling of these stories so important.